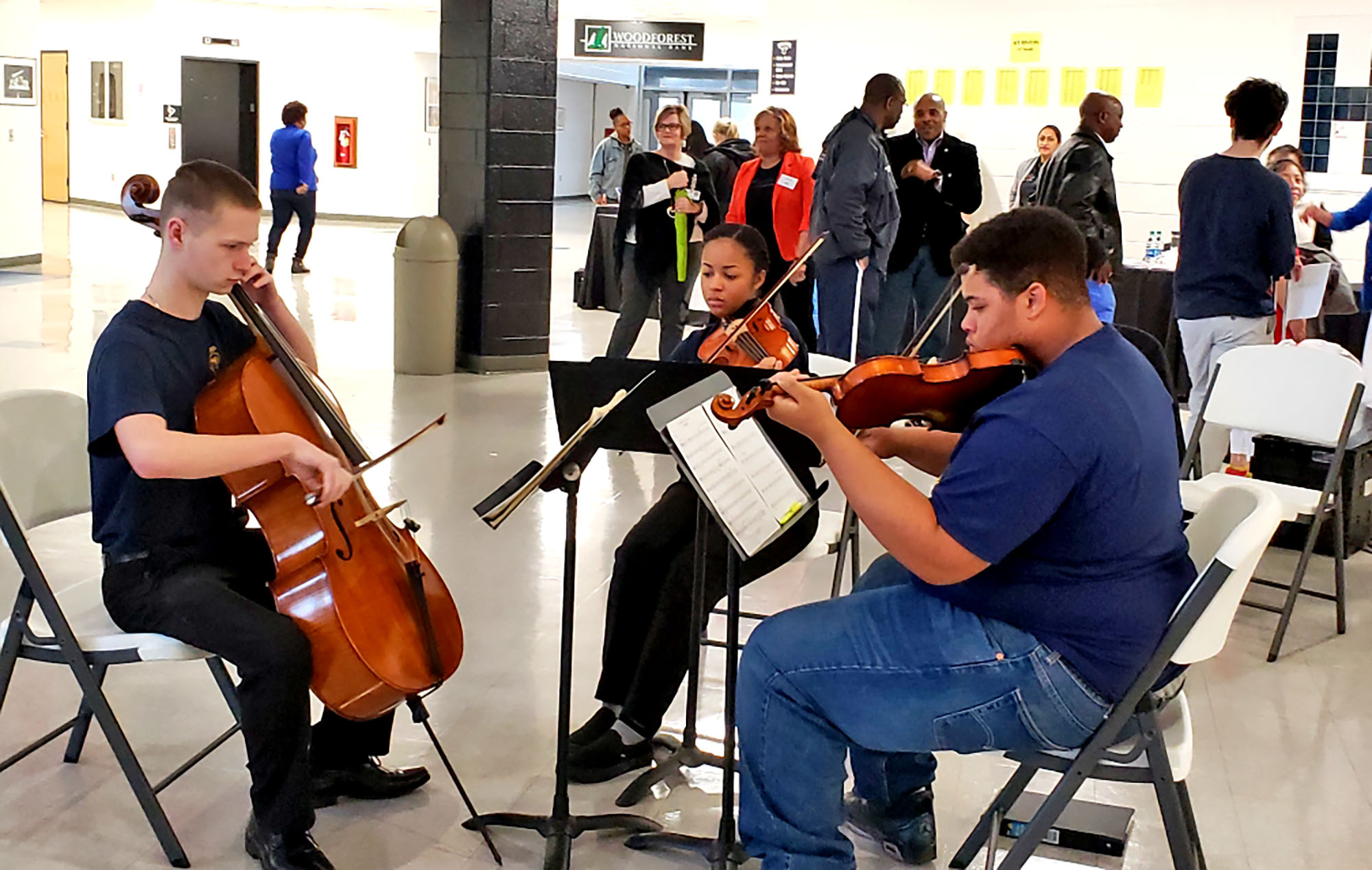 From left to right, Justin Taylor, Nasia Mason and Khalil Wade perform on the cello, viola and violin respectively at Say Yes to DPS. Wade said his favorite part about performing is "the vibe of being onstage playing awesome music." (Photo courtesy of Cindy Taylor)

Informational booths from different Durham Public Schools departments lined the walls of the Hillside High School lobby last Saturday. Parents and students could ask questions about program offerings at these booths, as part of a fair called “Say Yes to DPS.”

“We really wanted to be able to showcase them and to be able to put a friendly face on DPS for folks,” said Mary Griffith, marketing and community engagement director at DPS.

DPS Superintendent Pascal Mubenga said with a quickly growing school district, it’s sometimes difficult to be aware of all the opportunities DPS offers.

“I think we’re getting to the point where a lot of our parents and the community members do not really know what we are offering,” Mubenga said.

One office that the community may be unfamiliar with is the Office of Equity Affairs, which started in January 2017 to ensure educational equity among students.

“One of the main measures that I see as far as measuring our success is the transition in the conversations we’re having as a district, where we were a couple years ago to where we are now,” said Kelvin Bullock, executive director for equity affairs.

The office provides professional development for educators on issues such as implicit bias. The office also offers community programming for students.

“One of the things we do is we serve students who have not yet been identified but have shown a need for advanced classwork,” said Laura Parrott, coordinator of advanced academics. “That doesn’t happen in many districts.” 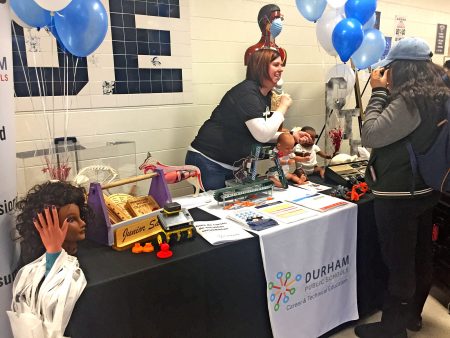 “It really helps get them on a career pathway so that by the time they graduate high school they’re all the more prepared to go into the workforce or to go into college and have a sense of what they really want to do for college,” Austin said.

Austin said the new Skilled Trades Pathway program is launching at Southern School of Energy and Sustainability in partnership with over 50 businesses, including Duke Energy.

A panel of school employees discussed the transitions between elementary, middle and high school in breakout sessions. They talked about the transitional process, described a day in the life and answered questions.

“I think that parents are so scared,” Griffith said. “I think giving that framework of what those transition years are like eases some of the fears about that.” 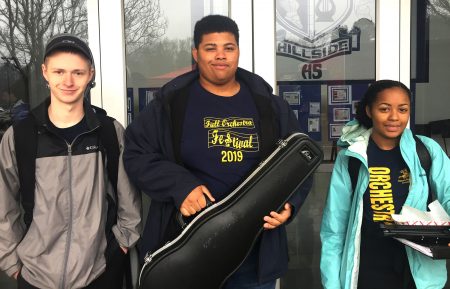 In the auditorium, students from E.K. Powe Elementary School and Holt Elementary Language Academy showcased the performance skills, such as dancing and singing, that they learned through the arts programs offered at their schools.

Taylor said he likes performing because it gives him a chance to learn not only his own part but also everyone else’s.

“You get a better chance of what it’s like to perform and work under pressure,” Mason added.

After the student performances, Magan Gonzales-Smith, DPS Foundation executive director, spoke to the audience of families and teachers about the recently formed nonprofit. The DPS Foundation aims to build community engagement and support for the students, educators and families of Durham Public Schools.

Gonzales-Smith said the foundation will announce $55,000 in grants that will fund 19 projects across the district. Students, teachers and parents were able to apply for these grants. She also addressed Mayor Steve Schewel’s new initiative called Better Together, which will bring together parents and elected officials with children in Durham’s public schools to share resources.

“We truly believe that the 33,000 plus students who are in our public schools today are Durham’s future, and our whole community needs to come together to provide support and investment and really celebrate that all the time,” Gonzales-Smith said. “They are our future leaders here in Durham.”