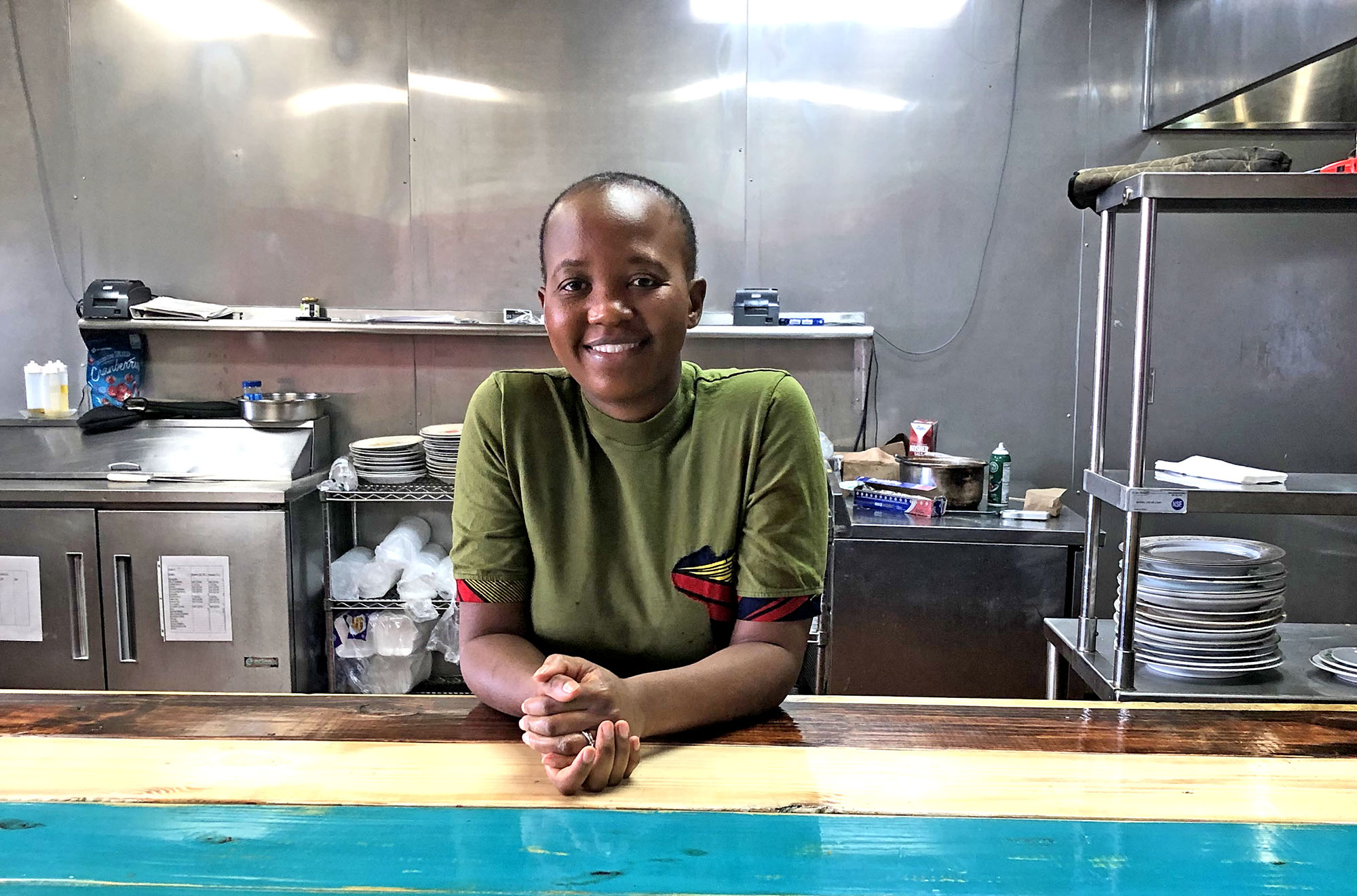 Chef Zweli Moyo-Williams happily leans on the wooden island that she and her husband made for their restaurant. (Staff photo by Arianna Swain)

The worlds of the elders do not lock all the doors; they leave the right door open. — Zambian proverb

Zambia borders Zimbabwe to the north. And although the proverb above is not from Zimbabwe, it fits remarkably well with Durham couple and restaurant owners Leonardo Williams and Zwelibanzi Moyo-Williams (Zweli).

The two fell in love, then lost each other for over a dozen years, then found each other again in an international story of war, work, loss, and food. Their love for the food of Zweli’s home country of Zimbabwe and each other imbues every part of their Durham restaurant, named Zweli’s, naturally and tucked in # 26,  4600 Chapel Hill Blvd., (in the shopping center that contains T.J. Maxx, across from Marc Jacobson Toyota)

When the couple wanted to open a Zimbabwean restaurant in Durham, they had no idea that they would be the first in the country. “We surveyed for about two months to seek examples of how other restaurants of our type were marketing,” said Williams. “We couldn’t find any others. We then searched Visitor’s Bureaus and bloggers of African foods, restaurant publications, the National Restaurant Association and did not found anything about there being another Zimbabwean restaurant.”

Certain items on the menu can only be found at Zweli’s unless one travels to South Africa to get them. They have a Zimbabwean butcher who cuts meat specifically for them. They have to travel two hours to pick it up and bring it back to Durham to cook it. Every bite of the food is a taste of Zweli’s life story.

Zweli did not have an easy childhood, and it is difficult for her to talk about it to this day. Living in a war-torn country would be traumatic for any child. For a while she did not even know who her family was. During the seven most difficult years of her childhood, she learned to cook.

As remarkable as Zweli’s story is, the love story between Zweli and Williams is also moving.

Zweli followed her older sister to the United States in 1998. She was able to attend school and enrolled at North Carolina Central University, where she met Leonardo Williams when they were freshmen. They both say it was love at first sight.

“We happen to meet in the same room and I just remember hearing her accent and I found it so attractive and I just worked my nerves up to get over and say ‘hi,'” said Williams. “Unfortunately, I didn’t practice anything after that. I was frozen.” Eventually, they continued their conversation and Williams fell madly in love with her.

“Nobody had ever treated me the way he did,” said Moyo-Williams.

“I was young and a silly boy. I made a huge mistake and she smacked me, and she disappeared for 13 years,” he said.

Williams, a North Carolina native, grew up in Halifax. After graduating from NCCU, he taught middle school music at Shepard Middle School in Durham. He later became an assistant band director at Hillside High School, then a band director at Southern High School.  An award-winning teacher, he was promoted to assistant principal at Pearsontown Elementary, then became a senior district official for Warren County schools.

After 13 years of no contact with Zweli, Williams ran into her older sister and asked if she could arrange a meeting between the two so he could apologize. A conversation intended to only last a short time ended up lasting seven hours.

“I told her at the end of the conversation she needed to break up with her boyfriend so I could be her boyfriend and I told her the timeline,” said Williams. “I’m giving you two weeks to be single and then I’m gonna be your boyfriend, then a year later I’m gonna propose, then a year later I’m going to marry you. Then one day I’m going to put your name on a side of a building for the world to see how much I love you.”

Two weeks later Williams and Moyo-Williams were back together, and their plans were put in place. He took her back to her homeland to make everything official and a year later he married her. And three years later, they own a restaurant with her name on it.

Williams’ love for the food comes from the love he has for his wife.

When they first decided to create the restaurant, they didn’t have enough money to open, so Williams took money from his retirement plan to finance the launch of their restaurant.

Lamont Perry, a frequent customer, said,“The food is amazing. I think the story of Zweli brings character to their restaurant. It also shows me a venture like this is meant to be because its grounded in reality.”

Durham is known for its restaurants, but not all restaurants can claim to carry an authenticity the way Zweli’s can — rooted in being lost and found, in home and in love.

Arianna Swain of Durham is a senior journalism major at N.C. Central University. This fall she is serving as a writer-photographer for the Durham VOICE.