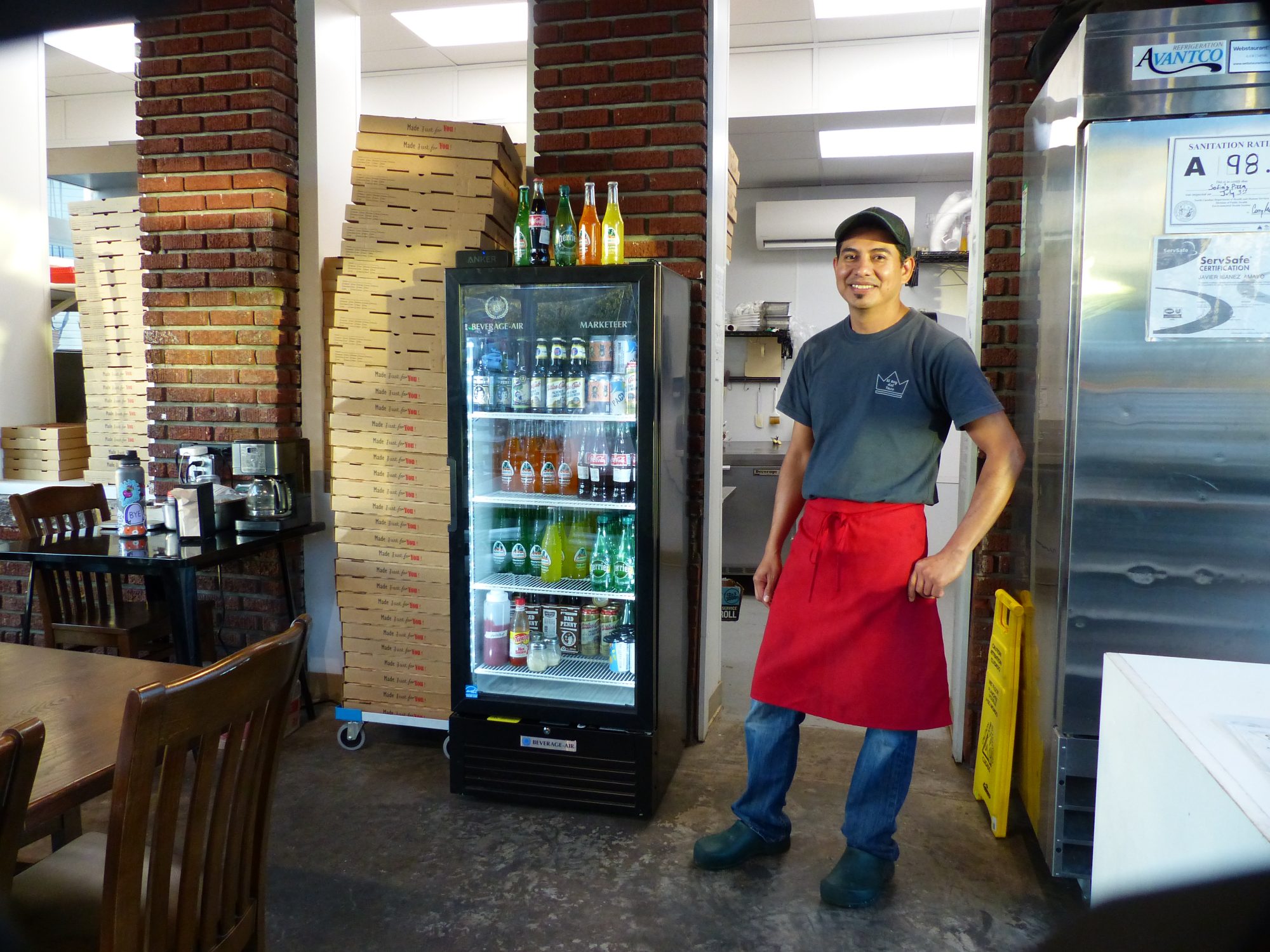 Angier Avenue in historic East Durham has seen its fair share of added concrete, construction, and changes to the neighborhood within recent years. This ever-changing landscape we call Durham is becoming a host to new faces, housing spaces, and local businesses at a dizzying pace.

One of those newcomers, Sofia’s Pizza, opened its doors to the community in December 2018.

“The main reason to start the business was because there wasn’t a lot of food in the area,” co-owner Jorge González-Peña explained.

The new addition found a home at 2201 Angier Ave., in what was originally a Gulf gas station and garage constructed in 1930. After the collapse of Gulf Petrol, the building sat vacant for years.

That is, until the González-Peña , the owner of El Ray Del Taco’s food truck, began a hunt for a kitchen to call his own. He and wife Emily Berkeley had been using a commissary kitchen at Joe’s Diner for a few months when they caught wind of a potential place to start a new enterprise.

Portland, Ore. -based Migrate Property 2, LLC was working with the City of Durham on a proposed business revitalization project when the company was contacted by Emily and Jorge. The couple wanted to open a family restaurant, offering pizza, subs, potato wedges, wings, and local beer.

This historic landmark building wasn’t the easiest structure to convert.

“The whole process was pretty hard,” said Gonzalez-Pena. “We had to deal with general contractors, and there was a lot of paperwork. It’s not easy going from gas station to pizzeria. Plus, it’s a historic building, so that comes with its own set of regulations.”

Gonzalez-Pena has been running El Ray Del Taco since 2007, but he has a long background making pizzas, too. Some of his earliest culinary memories were of tossing pies, sprinkling cheese, and slinging sauce at local pizzerias while he lived in New Jersey.

Jorge and Emily originally took up their North Carolina residence in Raleigh, But when the daily commute on I-40 began to take its toll, they decided to move to East Durham.

The couple soon noticed that the community had become a food desert in recent years. They took on the mission to help remedy that.

“The community needed places to eat, and a pizzeria seemed like a perfect response,” said Jorge.

“When we started the business, it was a goal to be able to provide the people of the community with jobs that paid a livable wage and join the Durham Living Wage program,” said Jorge. Sofia’s employs four full-time workers, along with three part-timers. The owners plan to add more positions as the business grows.

The ups and downs of change

While grateful for their newfound opportunity, Sofia’s owners view some changes in the neighborhood with mixed emotions.

“The changes in the area has been good for business, but also created some issues with housing,” said Jorge. “We have had to watch some of our neighbors move out because of the recent spike in housing prices.”

Meanwhile, Sofia’s has gained a loyal base of satisfied customers during its brief tenure.

“It’s been great having Sofia’s in the neighborhood,” said Rob Snyder, as he picked up his order of pepperoni pizza and buffalo wings as his pooch waited patiently outside. “We live just around the corner, so it’s a perfect spot to grab some great local food and take the dog for a nice walk at the same time.”

As Snyder grabbed his to-go order, another neighbor, Phillip Stapleton, was dining in with a slice of pizza, potato wedges, and a frosty local brew.

“I love the food here,” said Stapeton. “I used to get subs from a place down the street, but they closed years ago. It’s been awesome to have fresh food at an affordable price in my neck of the woods again. Not to mention — the wings are slammin’.”

James Jeffries is a senior Mass Communications major at North Carolina Central University. Originally from the mountains of Tennessee, Jeffries moved to Durham in 2015. He is a writer and social media marketing guru. In 2019, James was published in "The Bulls of Durham" living history book, by Sheila Amir.