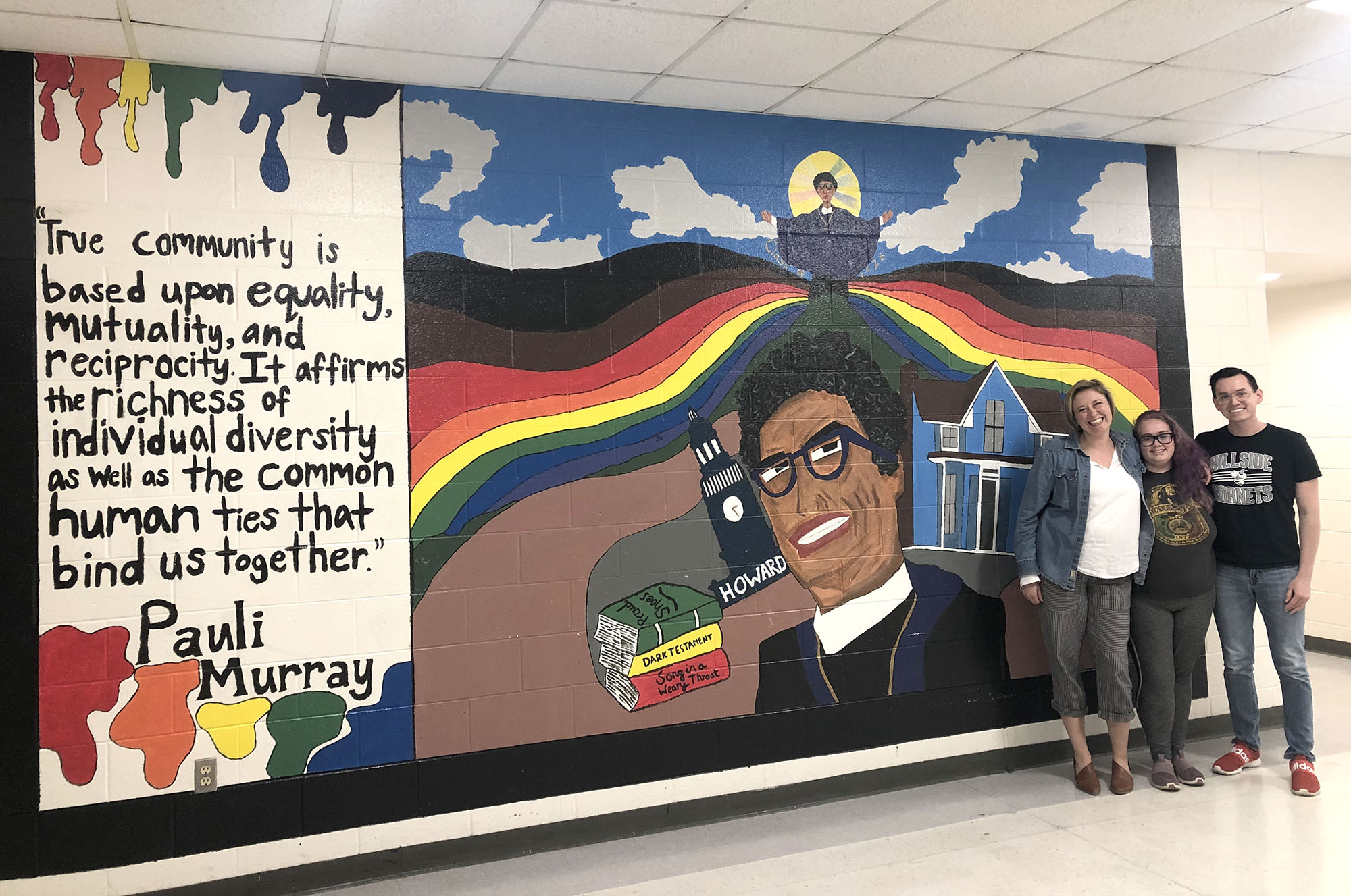 Pauli Murray, the noted civil rights leader and women’s rights activist, is one of Hillside High School’s most accomplished alumni. But until recently, there was no physical recognition of Murray at the school.

Thanks to the school’s Gender and Sexuality Alliance (GSA), that’s no longer the case.

With the help of the Durham Public Schools Foundation (DPSF), the group created a mural of Murray to keep her memory alive at her alma mater.

“It’s been a while now that we’ve recognized that Pauli Murray was a Hillside graduate, and it seemed rather strange that there had been no real acknowledgement of her in the building,” GSA adviser and Hillside English teacher Holly Jordan said.

Murray, who was born in Baltimore but relocated to Durham as a child, graduated from Hillside in 1926. Murray was a civil rights leader and human rights activist from the 1930s to her death in 1985 and was a member of the LGBT community. In 1977, she became the first African-American woman to be ordained as a priest in the Episcopal Church.

Jordan and Mark James, her fellow GSA adviser and English teacher, first started a conversation in 2018 about the lack of representation in the halls of Hillside.

When Jordan learned that DPSF would be giving its inaugural grants to student and teacher-led projects, she approached Erin Batten-Hicks, the then-GSA president and Hillside senior, about applying for funding to create the mural of Murray.

They applied for a grant in the fall of 2018 and received $500 in funding last January.

After a presentation from the Pauli Murray Project, a local community group dedicated to upholding Murray’s legacy, GSA members created a list of ideas for what the mural should include, then hosted a school-wide art contest for students to submit design proposals for the mural.

“It was all student-led,” James said. “Different students clung to different elements of Pauli Murray’s life that they related to and they combined all of that into ideas for the mural.”

After selecting a winning artist, the painting process began in April.

The winning design, submitted by student Rene Chavez, features images of Murray in her clerical robe, three of her published books, her Durham home and the bell tower at her collegiate alma mater, Howard University.

Advanced art students worked on the mural during class throughout the spring semester, and GSA members helped after school and on the weekends. Jordan said that many of the primary artists were part of Hillside’s growing Latinx population and that people of all sexual orientations participated in the project.

“It was truly a collaboration in so many ways,” she said.

Madison Barriere, the current GSA president and a senior at Hillside, said painting the mural helped her feel more included and represented at Hillside.

“I felt like a real LBGT student,” Barriere said. “I’m not very visibly LGBT, so to be out there painting a rainbow on Hillside’s wall felt very inclusive.”

While the GSA hosts annual events like National Coming Out Day specifically for LGBT students, Berriere said the mural is something that all students can enjoy.

“It’s for people of color. It’s for all students of Hillside. It’s for LGBTQ people,” Barriere said. “It’s also for people who want to be lawyers and doctors and whatever else Pauli Murray did in her life, because she did so much.”

The mural was completed in early June and was unveiled in a ceremony with community members, representatives from the Pauli Murray Project and Durham Public Schools administrators in attendance.

Since the mural was unveiled, Jordan and James both said they have noticed students stopping to look at the art and discussing Murray, which they see as accomplishing their goal of bringing awareness to Murray’s legacy.

“It’s been really cool to see students start to learn about Pauli Murray and who she was and the legacy that she left behind and the roots that she had at Hillside,” James said.

James hopes the mural will serve as a lasting reminder of Murray’s legacy for generations of Hillside students and the greater Hillside community.

“It’s not just for this graduating class,” he said. “It’s for the parents and grandparents that come in and the future generations that will come in and now recognize Pauli Murray and the (alumna) that she was here.”

For a printer­-friendly version of this story, click here

Korie Dean is a junior journalism major at UNC-CH from Efland. This spring she is serving as a staff writer/photographer for the Durham VOICE.