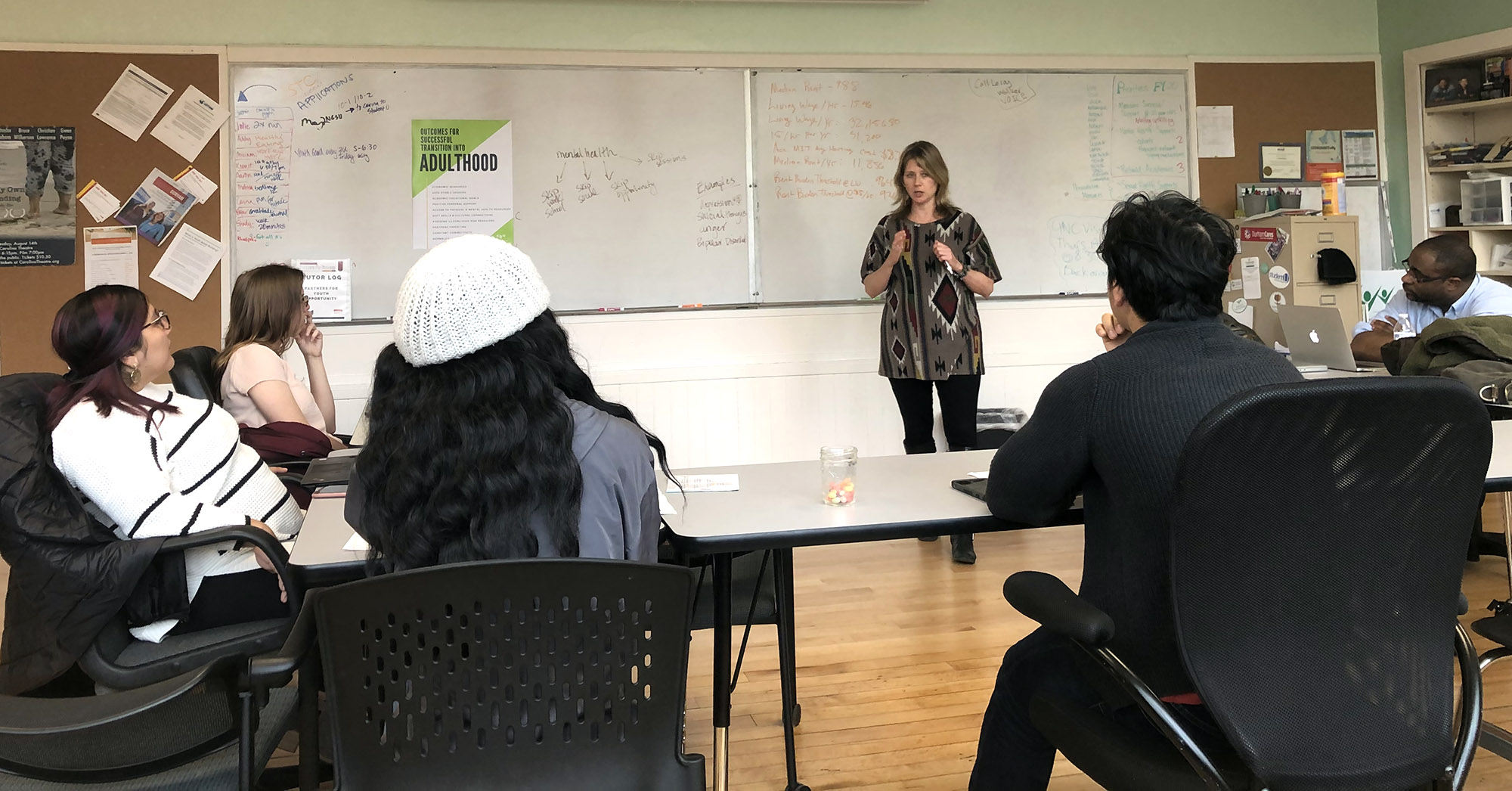 Inside the room of Partners for Youth Opportunity (PYO), a nonprofit serving youth in Durham, there are picture frames that display the faces of past and current PYO students. Each face has a story to tell to anyone who walks through the door.

Carlton Koonce, 37, of Durham, is the workforce development director at PYO. Koonce has worked with the organization since 2014. He said his favorite part of his job is seeing the youth grow up, get older and come into their own.

“I think about kids who came in when they were 14 and they were crying because they didn’t want to be here. They come back at 22 or 23 and they’re like, ‘Man, Koonce. I love you,’” Koonce said. “When they come in at age 14, they don’t have much power, so we try to give them the tools they need to get that independence.”

Koonce said one of PYO’s values is to focus on the youth that nobody else is focusing on and give them the tools necessary to live a sustainable life.

In 2014, two nonprofits, Partners for Youth (PFY) and YO:Durham, a program of Durham Congregations in Action, merged to become Partners for Youth Opportunity, Koonce said. PFY served the west side of Durham and focused on academics. They utilized tutoring and helping the students get summer work. YO:Durham served the east side of Durham, focusing on mentoring the youth and providing internships for them.

Koonce said he has seen the program grow from 20 kids to about 130.

“Both organizations were born to help kids who were disconnected and disadvantaged from the community, work and school,” Koonce said.

The two organizations merged to cover a larger area of Durham, yet still focus on mentoring, internships, academics, workforce and volunteering.

“PYO is a holistic youth-serving organization that serves the youth of Durham. Any youth in the area who is a first-generation immigrant, first-generation college student, if you have a parent, sibling or family member incarcerated or if you get free or reduced lunch, can come to PYO,” Koonce said. “We use these benchmarks because they let the organization know that these individuals are more likely to become disconnected, we don’t like to say ‘at risk’,” explained Koonce.

Koonce said that youth can come to PYO as early as age 14. The organization then follows them until four years after high school. As soon as teens come to PYO, they can be involved with educational, economic and social assets they may not receive elsewhere.

Opening a savings account and retaining a percentage of the money is a skill that the students learn during their time at PYO. Koonce said this skill is especially important for students who go to college because they will have extra money to use if they run out of meal plan money. That way, they won’t have to decide on eating a meal or purchasing a textbook.

Julie Wells, 47, of Hillsborough, North Carolina, and the executive director of PYO, emphasized the importance of teaching youth to be financially capable.

“We have proven that young people will save if given the opportunities and mechanisms to do that,” Wells said.

Miracle Harris, 20, of Durham, has been in PYO since she was a teenager. She said PYO has taught her things she wouldn’t have learned if it weren’t for the program.

“PYO helps us get a bank account and get everything started with saving money,” Harris said.

Wells said when deciding which paths the youth should take, such as learning to save money, the PYO staff is always thinking about whether these decisions will help break the cycle of generational poverty.

Youth can be stuck in the cycle of poverty because they were born into it, because of institutional racism and systemic inequity or a plethora of other reasons. These kids aren’t given the same opportunities as kids who come from families with more connections and wealth, explained Wells.

“We want to get young people to a place where they have choices just the same way that people who grow up in the middle class who have some generational wealth that gets passed down to them,” Wells said. “It could be a car or one day you’re going to get your parents’ house. Kids in poverty don’t get that stuff, so we are helping them build their own nest egg so they can make moves.”

Koonce explained how PYO helps their youth become economically stable through creating connections for the students to work with professionals in their community who are experts in law, science, housing and broadcast. PYO partners with these individuals so that when a student is interested in being an OBGYN, for example, they have a contact for that student to further advance their career.

“We have all these different kinds of people to lean on to make things happen for us,” Koonce said. “We’re the folks that go out and help you get that internship with the law office because you don’t have that dad or uncle who can hook you up like that.”

PYO strives to level the playing field for their students.

“I can hook the kids up with partners in the community and tell the professionals all about the youths’ story and tell them, ‘This is why we have to be patient with this one and this is why we can be a little harder on this one,’ and they will teach the kids the ropes of what it’s like to become a professional in many areas such as law, finance or medical,” Koonce said.

Wells explained that PYO wants to break the systemic inequality that exists in Durham so that their youth feel as if they can live a self-determined life.

“We have had kids go off to UNC-Chapel Hill; we have some kids in private schools all over the country. We have some who are interning with Microsoft and Google on the West Coast. All of this was exactly what our hope was: Even though you might come from a family that may get free or reduced lunch, we want to give you the same opportunities that other students get,” Koonce said.

PYO funds for their nonprofit in part by hosting the Rise and Shine Breakfast the first Thursday in March, Koonce said. It is their biggest fundraiser of the year.

PYO inherited the concept of the breakfast fundraiser when the two nonprofits merged in 2014. During the breakfast, business leaders and elected officials come together to learn what exactly is happening around workforce development for youth in Durham, explained Wells.

“It’s a homecoming in some way with all of these businesses and elected officials who have supported us for so long,” Wells said.

Koonce mentioned there is always a hot breakfast and plenty of coffee. The restaurant catering the food this year has a unique tie with PYO.

“This year it’s going to be buffet style from the Angus Barn. What’s so great is that the owner of the Angus Barn would come in the summertime and talk to our kids about being a business owner and tell them the things they have to do if they want to get a job,” Koonce said.

This year’s Rise and Shine Breakfast will take place March 5, from 7 a.m. to 8:30 a.m. in Bay 7 at the American Tobacco Campus. PYO will use the time to report on what they learned over the last year, and then they will announce their new plan to scale their impact in Durham for the upcoming year.

“We are moving young people from surviving to thriving. We are using the breakfast as a way to announce our success with young people and launch a plan for us to impact more young people across Durham,” Wells said.

PYO has impacted so many lives since they began, and they continue to grow and assist the youth in the community as they see many of their students excel once they are adults.

“I have been on the PYO website, and the same people I saw when I first started are doing big things now, so obviously PYO is doing a good job,” Harris said.

Koonce said the success stories of his past students makes the work worth it.

“Do you remember how I told you that at age 14 they don’t really have a lot of power? Guess what, at 22 or 23, I tell them, ‘You have the power now. You make your own decisions and you know who you are and what you can do,’ ” Koonce said.

Celia Farmer is a senior sports administration major at UNC-CH from Gastonia. This spring she is serving as a staff writer/photographer with the Durham VOICE.