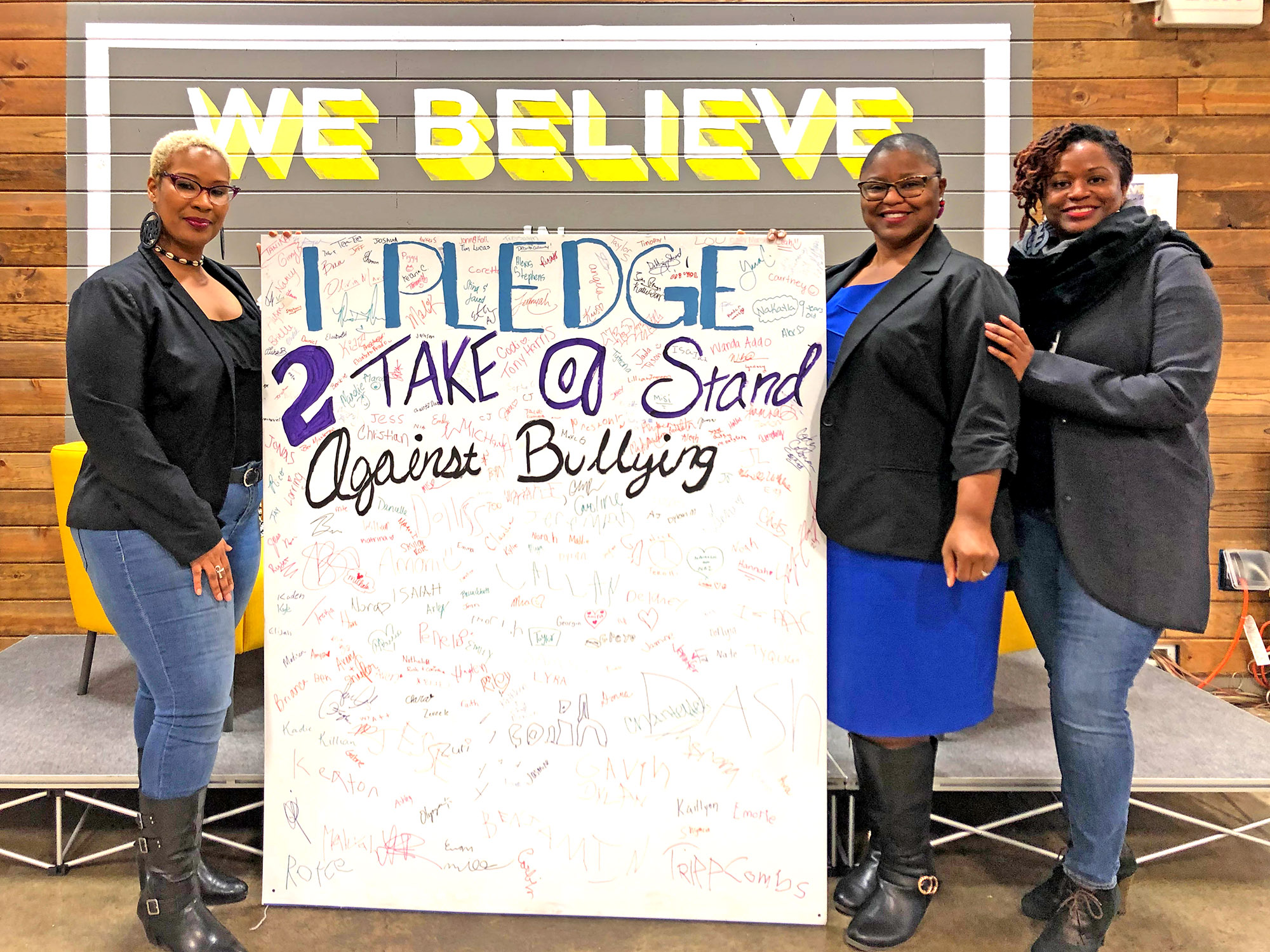 Durham native Monica Daye was sexually assaulted in a church when she was 11.

“My whole life completely changed,” she said. “I went from an A/B student — outgoing, dancing — to being a student that was failing with D’s and F’s, rebelling, cursing teachers out and getting in trouble.”

When she was 19, Daye stood up and spoke out. She read aloud her first poem before a crowd and soon after became a spoken word artist, a journey she said helped her heal from her trauma.

“I started writing poetry when I was 11, and it was just a way for me to express myself,” Daye said. “When I couldn’t articulate what I wanted to say, I could really express my emotions, my feelings, my hurt, my pain in a poem.”

After she published a book about her experiences, many organizations fighting domestic and sexual abuse invited her to speak at their events. She said that’s how she noticed “a gap” — that few organizations used art as therapy, which had been crucial to her own healing.

That’s why she founded StandUp-SpeakOut of North Carolina, a Durham-based organization that uses art therapy to help children heal from sexual abuse and domestic violence — both victims and witnesses. StandUp-SpeakOut also seeks to prevent the cycle of generational abuse and teach young people the power of words.

“The organization is built on the services and programs that were not available when I was a child who was experiencing my own trauma,” Daye said.

StandUp-SpeakOut started in 2004 as a grassroots nonprofit that met in local libraries and coffee shops. In 2015, they took it further: They filed as a 501(c)(3) tax-exempt organization, created a board of directors and two years later found a home at ReCity Network on Broadway Street.

Among other programs, StandUp-SpeakOut offers school support groups, where they go into schools and talk about topics like bullying and healthy dating.

Tai Caldwell has been StandUp-SpeakOut’s community outreach facilitator since 2018.

“What I do as a community outreach facilitator is to go and enhance the lives of our young people by helping them understand how much power they have within themselves,” she said.

One of their activities is called 3 C’s and a T – choices, consequences, coping skills and triggers. In that activity, Caldwell said she talks to students about choices and their consequences, as well as how they can recognize and deal with their triggers.

“What you’re thinking about is going to drive what kind of life you will have,” she said she tells them.

According to the nonprofit’s impact report, the organization served over 1,000 K-12 students in their community outreach programs last year.

StandUp-SpeakOut also offers a year-round program and summer camp called Girl SpeakOut for girls between the ages of 10 and 18, in which they use the arts — such as writing, painting and acting — to boost girls’ self-esteem and teach them to speak out against abuse.

Daye said these programs are all “safe spaces”: judgment-free zones where kids can speak freely and feel safe. That’s why she said she prefers to hire volunteers who have “real lived experience” as survivors or witnesses of domestic or sexual abuse.

“The generation we deal with, they need real people in front of them,” she said. “And they’ll recognize if you’re not.”

That’s why they don’t wear business suits and, to an extent, disclose whether they are survivors.

Necolle Winstead joined StandUp-SpeakOut’s staff last year. She said she was in an abusive relationship when she was 17 and has been trying to teach her daughters to be mindful of their own relationships.

In 2017, she signed up her 15- and 16-year-old daughters for the Girl SpeakOut summer camp. She said her youngest daughter, Kailah, didn’t initially want to go.

“But when I picked her up, her demeanor was like she enjoyed herself,” she said. “As a mom, you always look for things your children can enjoy as well as what’s good for them too. I was like, ‘Wow.'”

Winstead said both girls have been involved with the camp either as participants or junior counselors ever since.

But Daye said that StandUp-SpeakOut is facing a big challenge: too much growth and not enough staff. They have a small part-time staff plus interns and volunteers, but Daye said she needs more people — and funding — to meet every outside request or speaking engagement.

As StandUp-SpeakOut’s board chair, Margaret A. Brunson, helps Daye with development and financial sustainability. She said there’s only so much they can ask from volunteers before it becomes exploitative.

“I think that there’s an opportunity for StandUp-SpeakOut to have a major impact, but we need people,” she said. “We need the folks. We need staff, and the only way to do that is to have the resources to pay people.”

Sometimes it’s stressful, but Daye says it’s worth it — especially when she hears girls say they came forward as a result of StandUp-SpeakOut’s programs. Last year, a 15-year-old in Girl SpeakOut was sexually assaulted when she was walking home from school. Daye and Caldwell went to the hospital and stayed with her until about 1 a.m.

“While sitting there in that hospital, she shared that she wouldn’t have come forward if it wasn’t for knowing that she had our support,” Daye said.

They had talked about these issues in Girl SpeakOut, she said, repeatedly telling them that sexual assault is not okay.

“This is not what people should do to you. Your body is sacred. No one should violate that,” Daye said. “Because she continued to hear that, she felt confident enough to come forward and say this happened, and there’s so many girls who don’t.”

That’s why StandUp-SpeakOut exists, she said.

“Those are the rewarding stories that say, ‘We’re on the right track,’” Daye said. “That’s what keeps me going.”