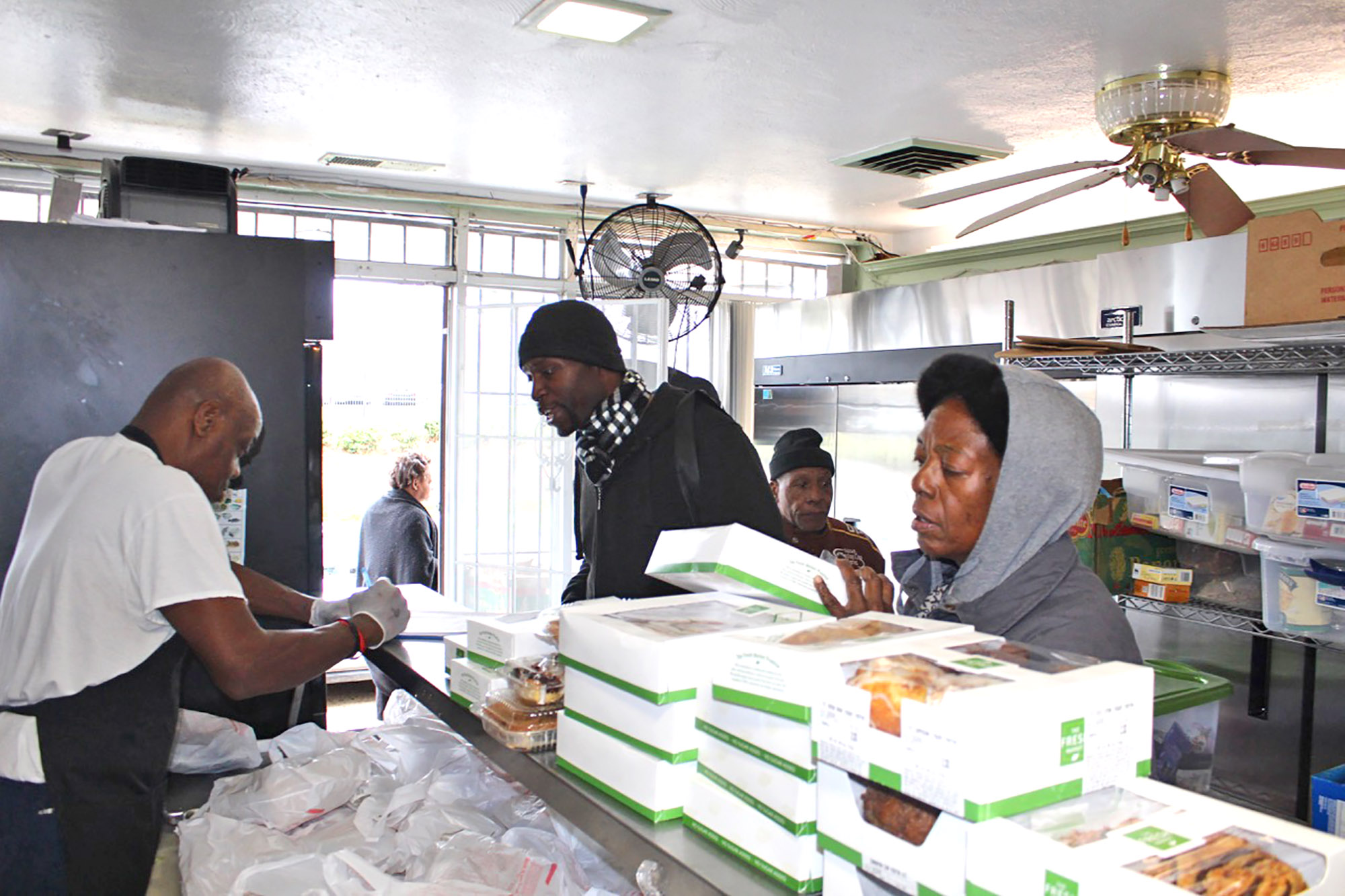 Beneath the faded New Visions of Africa sign, inside the unassuming barred building, Karen Santoro-Abdullah put a hand to her heart and choked back tears.

“I love helping these people because it makes me feel good to give them respect,” Santoro-Abdullah said.  “Respect gives people hope; if people are treated with respect and a smile, it could encourage them to better themselves, to go get a job.”

It does not cost anything to show people respect, give someone a smile or treat others like you want to be treated, Santoro-Abdullah explained while placing a container of hummus into a bag.  She was packing plastic bags with sandwiches and various side items as she does from 3-6 p.m. every Monday, Wednesday and Friday for approximately 90 people who partake in the community kitchen run out of New Visions of Africa, 1306 Fayetteville St. The small soul food restaurant turned community kitchen is also the home of Believers United for Progress.

“Oh, the cantaloupes!” shouted Santoro-Abdullah’s husband, Kasib Abdullah, directing a young man who walked through the smudged glass door. “They are stacked up on the side of the building. Could you go put them on the table?”

Luke Caldwell, a Durham native and retired cook of 30 years, stood behind the cafeteria-style counter smiling.  He’s worked at New Visions of Africa for the past 10 years and knows the drill.

“You can’t make him haul those cantaloupes; he just had work done at the dentist!” Santoro-Abdullah said to her husband.

Abdullah, who is from Newark, New Jersey, is the executive director of the nonprofit designed to promote positive change in Durham’s community through social engagement.

With eyes much like a playful teenager, Abdullah continued directing the young man who placed the cantaloupes on the first-come, first-served table outside, grabbed his free meal and left after receiving a “God bless you” from Santoro-Abdullah.

In 2005, Abdullah opened New Visions of Africa and immediately began to develop a heart of service for the community, fueled by the saying, “when God blessed one, God blessed everyone.”

During Ramadan of 2005, Abdullah invited the community to come and eat a free meal, only asking people to give someone else a seat once they cleaned their plates. That night, the restaurant fed over a hundred people, prompting Abdullah and several other members of his mosque to consider the next steps in helping the community.  Out of this, Believers United for Progress, or BUP, was born.

New Visions of Africa closed in 2011 in order to concentrate on outreach programs.  BUP’s current focus includes running the community kitchen and delivering 40 hot meals for youth to the Weaver Street Recreation Center and the Durham Teen Center at Lyon Park three days a week.

The team also cooks, prepares and serves food at Urban Ministries of Durham once a month.

“Sometimes you don’t feel like cooking, so it’s nice to be able to come and get a meal,” said Rick Acevedo, who volunteers at BUP on Sundays. “Being below the poverty line, it is really hard to get items like vegetables and bread, so the community kitchen is very valuable.”

Upon arrival at the kitchen, people only have to provide their name, age, gender and race to walk away with a full meal donated by BUP’s partners, which include the food bank, The Fresh Market and Sprouts.  Abdullah said the kitchen alternates between sandwiches and hot meals consisting of a meat, vegetables and rice.  For adults, a dollar donation is required to take home a pie, muffins, cookies or pastries.  Abdullah says he cannot help but give the children sweets for free.

“The first thing we did when we came around here was try and put a positive face to the community,” Abdullah said above the exchange of light-hearted remarks between Caldwell and the people grazing over the neat stacks of boxed sweet-tooth fixes.

Before instilling change, however, Abdullah says he had to get to know the community.  With the belief that conversation is the key to success, he would stand outside and talk to people over and over again until they finally talked back.  He made his stance on certain issues—drugs and prostitution—known early on.  Those issues no longer affect his section of Fayetteville Street, but have moved to the next corner over.

“I see people more socially connected,” Abdullah said. “When I first came around, even people in the community were not speaking to each other, but now I see that people are more adept; even coming in here, people know we don’t tolerate any nonsense.”

While placing the Styrofoam containers packed with hot chimichangas into a carrying bag to later be delivered to the teen centers, Caldwell said he likes working with BUP and helping the underprivileged, but the customers are not always easy to deal with.

“It can be challenging, because for some people, enough is never enough,” said Caldwell.

At the community kitchen, kind words and a little inspiration are the recipe for encouraging people to do what they’ve always dreamed of doing.

Abdullah empathizes with the issues rooted in the Hayti community.

“I messed with drugs for over 30 years. I never shot dope, never smoked crack, but I took cough syrup, pills, marijuana and acid; this was a night of me getting high,” said Abdullah.  “I can look back and laugh now, but it cost me.”

When he gets the chance, Abdullah offers wisdom gained from his own experience to those struggling with similar issues.  He suggests writing something down every day to reinforce the change one wants to see and really let it sink in.

Santoro-Abdullah summarized the heart of BUP saying, “There is too much need and not enough help.”

Abdullah hopes the Hayti community will fight today’s environment of separation with a simple solution.

“People will say, ‘I’m not speaking to him,’ because society is led by fear,’” said Abdullah.  “But it’s all right to just say hello to somebody–it is.”