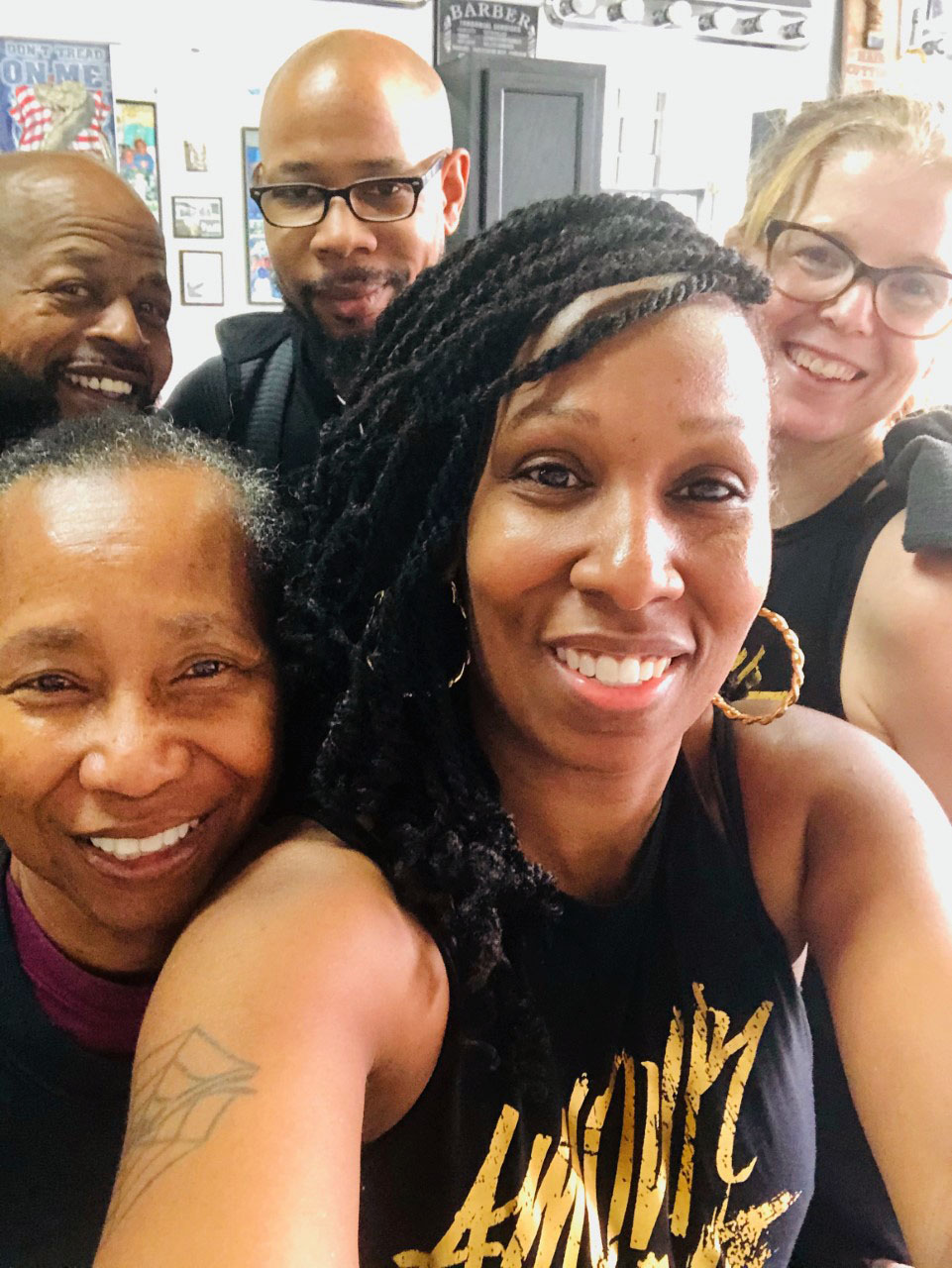 Taken before the social distancing guidelines went into place (from left to right), LaQuinta Barber, Samuel Jenkins, Ayo Wilson, PJ Rimmer and Jessica Mazyck take a selfie together right after a virtual Zumba class at Samuel and Sons Barbershop on Angier Avenue in Durham. “Let’s stay in shape, let’s think positive, let’s take one hour and not think about the world’s coming to an end,” Jenkins said. (Photo courtesy of Jessica Mazyck)

Samuel and Sons Barbershop on Angier Avenue has been a pillar of community in Northeast Central Durham for years. The coronavirus pandemic isn’t changing that.

Samuel Jenkins, owner of Samuel and Sons, decided to transform the barbershop into a Zumba studio in order to keep people moving while many of Durham’s recreational facilities and gyms are closed due to the virus.

“He said, ‘Hey, we could probably have a small class at my shop,’” said Maylisa Nicholson, a Zumba instructor who has been teaching classes at the barbershop. “‘I’ll just move things out of the way and kind of reorganize things, and then we can still be able to have a class.’”

Jenkins said he wanted to keep the morale of the community high while it faces challenges the coronavirus has presented.

“Let’s stay in shape, let’s think positive, let’s take one hour and not think about the world’s coming to an end,” Jenkins said.

Jenkins has been inviting Nicholson and her fellow Zumba instructor, Jessica Mazyck, to the barbershop over the past couple weeks, where they have been livestreaming classes on Facebook to stay in accord with social distancing guidelines.

“He’s been one of the avid Zumba-goers in my class,” Nicholson said of Jenkins. “We haven’t had the opportunity to have class, and it’s really important for a lot of people.”

Mazyck is a Zumba instructor at Millennium Sports Club on Hillsborough Road in Durham. Due to the coronavirus outbreak, all fitness classes have been suspended at the facility, which has been hard on Mazyck and her regular attendees.

“I had no idea it was going to get this serious, this quick,” Mazyck said.

Mazyck grew up in East Durham, where Samuel and Sons was the go-to barbershop. She said Jenkins came to one of her classes and has been doing Zumba ever since.

“He’s been very accommodating,” she said. “I’m right back here in my old stomping grounds.”

Neither Mazyck nor Nicholson are being paid for leading the classes at the barbershop, but Mazyck said she’s been reassured by seeing people making positive comments online while she’s teaching and sharing pictures of themselves sweating post-workout.

Jenkins said hundreds of people have been watching and joining the workouts. One class had at least 240 participants join the livestream.

“Right now, I’m just interested in people moving and getting their mind and spirit right,” Mazyck said. “I just want them to at least have a temporary escape, if it’s only for an hour.”

Nicholson said she teaches Zumba during the week for Durham Parks and Recreation, which has canceled fitness classes until further notice.

She said that during this time, it’s important for people to continue exercising, not only to reduce anxiety and stress, but also to boost the immune system.

Mazyck agreed with Nicholson’s advice to keep moving during this time of social distancing and facility closures.

Mazyck is thankful for the opportunity to continue classes during these challenging times.

“I just want to encourage people to keep moving,” she said.