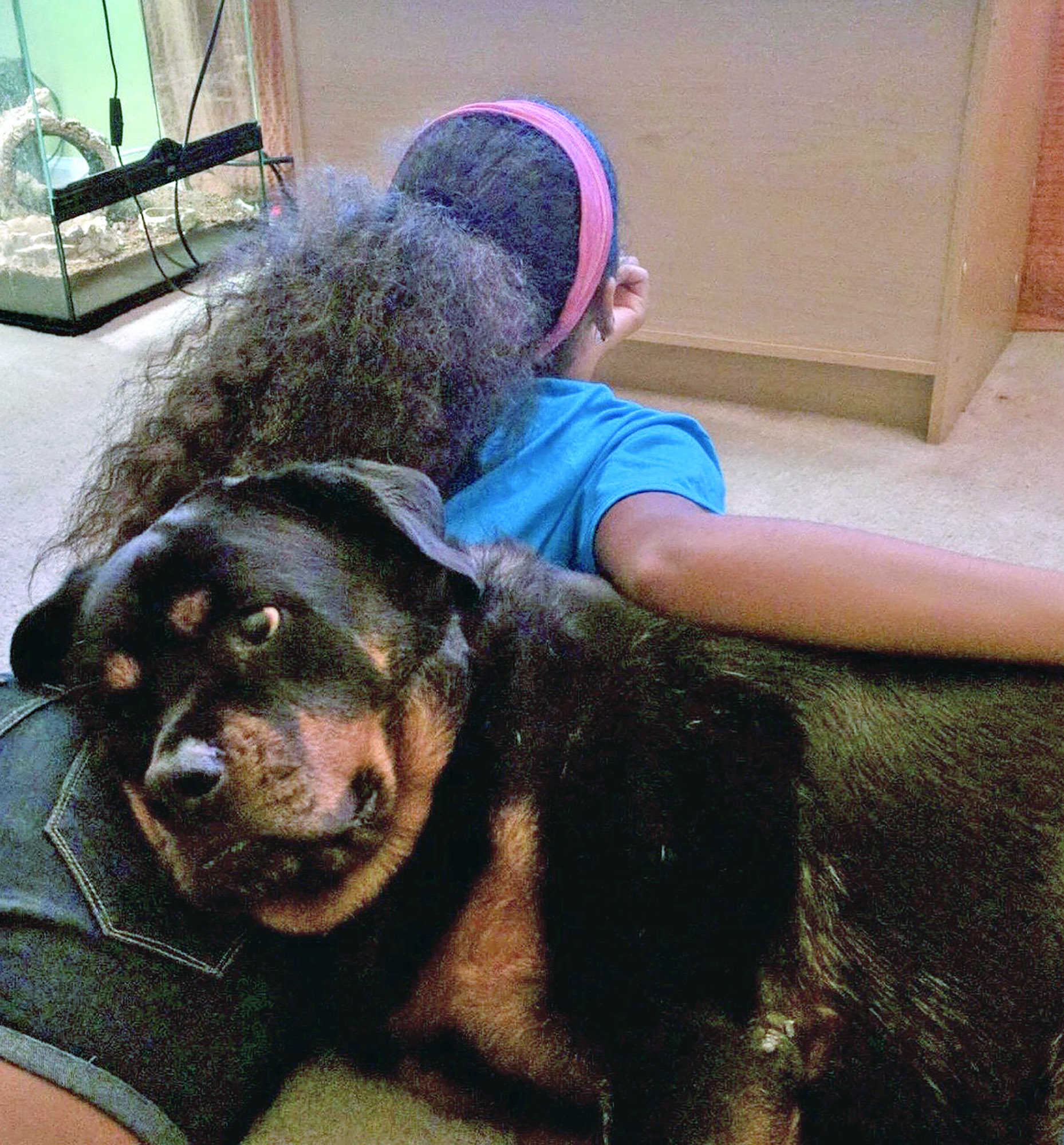 Nala the Rottweiler, who died late last year at 12 years of age, is pictured resting with writer Madison Reese. Nala was about 9 when this picture was taken. Studies show that 67 percent of American households include a pet of some kind.

I recently lost my long-time companions, Simba and Nala.

The pair of Rottweilers, both dying from old age — Nala at 12 and Simba at 13 — were integral family members since I was a toddler. I think about my dogs daily and often wonder how pets and their owners are faring during this pandemic

Animal shelters across the country have had to significantly shift the way they function due to COVID-19. In North Carolina alone there are currently 246,000 cats and dogs within shelters. I began thinking about how COVID-19 might be affecting the animal shelter system, adoptions, people willing to foster and current pet owners.

What is it like to own a pet during this challenging time?

Yamileth Maya, a pet owner in Durham, said she recently recovered from a bout of the virus.

“COVID was really confusing for our dog, Nico a Chiwennie,” she said. “He couldn’t stay inside with us, and we had to limit our time with him because we didn’t want him to get sick.”

Luckily for Maya, her pet could live in her backyard. During her time with the virus she was communicating with the Public Health Department about not only her well-being but also the well-being of her dog.

Unfortunately, Maya said, local health authorities had little to no information about how to keep her dog healthy. According to the CDC, “Cats and dogs, and a few other types of animals can be infected with SARS-CoV-2” which is the virus that causes COVID.”

For some pet owners the quarantine has helped them develop a closer bond with their pets.

Many pet owners might often relish the feeling of caring for their pet, and now with more time on their hands, might realize that they have even more love to give.

Kia Alvarez, an owner of two Rottweiler-mastiffs in Raleigh, said that quarantine has made her want more pets.

“Hova and Yeezeus are both old men,” Alvarez said of her dogs. “They are not as needy as I wish they were, and since my puppies aren’t puppies anymore, they require less and less of me.”

Alvarez said that if she had another puppy, it would require more training, longer walks and just more time in general, all of which she now has now that COVID keeps her working from home.

Alvarez is not alone — millions of Americans are working from home right now. According to the 2019-2020 National Pet Owners Survey conducted by the American Pet Products Association (APPA), “Sixty-seven percent of U.S. households, or about 85 million families” own a pet.

Many people like Alvarez want a needy companion during this time. They are looking for something they can put positive energy into and get some positive energy out of in return.

Pets are that something for millions of people worldwide. Pets have been proven to help with not only human mental health but also their physical health such as being linked to reduced blood pressure, boosting mood and reducing anxiety. In addition, as great companions, pets are also good for “easing loneliness, reducing stress, providing emotional support, motivation and giving purpose.”

During this stressful time, pet fostering rates since the outset of COVID-19 have gone up.

Katy Hansen, director of marketing and communications at Animal Care Centers of NYC, said about 25 percent of people who agreed to take in foster dogs temporarily at the start of the pandemic had adopted them permanently by late June.

The New York shelter was seeing lower than usual return rates on adopted dogs, according to a recent report from the Washington Post.

The SPCA has also seen the number of people willing to foster animals during the pandemic with rates going “up like crazy.” according to Molly Stone, director of community initiatives at the SPCA in Wake Forest, N.C.

With the millions of Americans staying home due to the pandemic, one might think that pet adoption rates have skyrocketed.

The Wake Forest SPCA said it has “seen a marginal decrease of animals being adopted.”

The SPCA made changes to the way it hosts visitations, which in turn has allowed for that marginal decrease.

“It takes a little bit longer now,” said Stone. “The marginal decrease doesn’t mean that more animals aren’t being adopted; it’s just because now adoptions have to be performed one visitor at a time.”

Animal shelters like the SPCA have had to adapt around the pandemic’s health guidelines in order to protect not only their customers and employees, but also their animals. Many animal shelters within the Triangle have evolved, and almost all interactions such as scheduling appointments to see and adopt the animals are now online.

As summer stretches into fall and the pandemic shows no signs of letting up, a variety of shelters, and animals in those shelters, across the nation and the community have been affected by Covid-19. While people have to go through more steps during this time in order to adopt animals, the idea of having a companion during what can be a lonely period is well worth it.

Pets are good for so many reasons and the pandemic is proving that they truly are our best friends.

That’s what Simba and Nala were to me.

Madison Reese is a junior at Jordan High School. This fall she is serving as an intern with DCI and a reporter/photographer with the Durham VOICE.