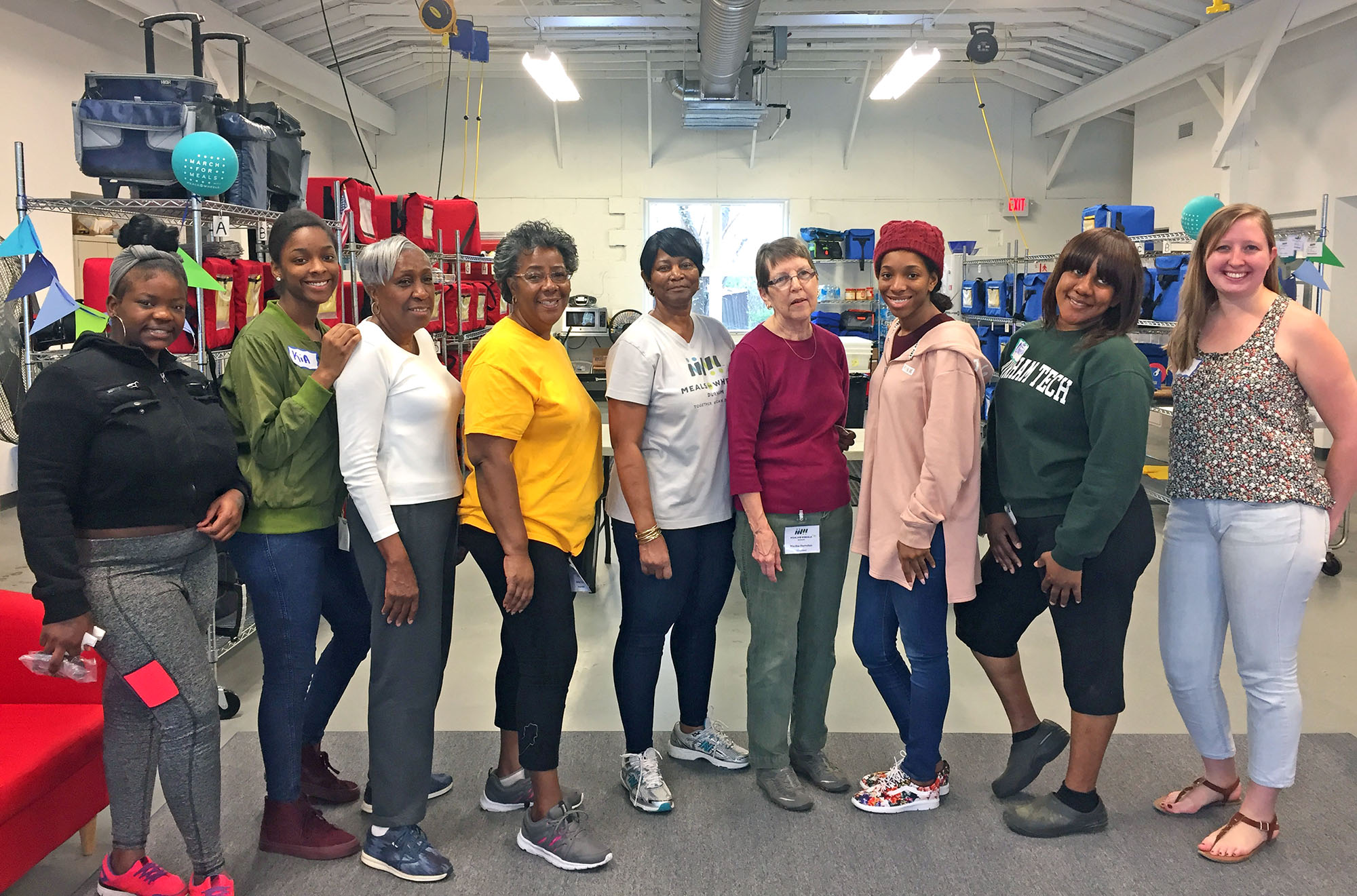 The second I set foot inside Meals on Wheels of Durham, I was immediately greeted with an air filled by the smell of sizzling hamburgers, the sound of animated chit-chat and the sight of dozens of smiling faces. 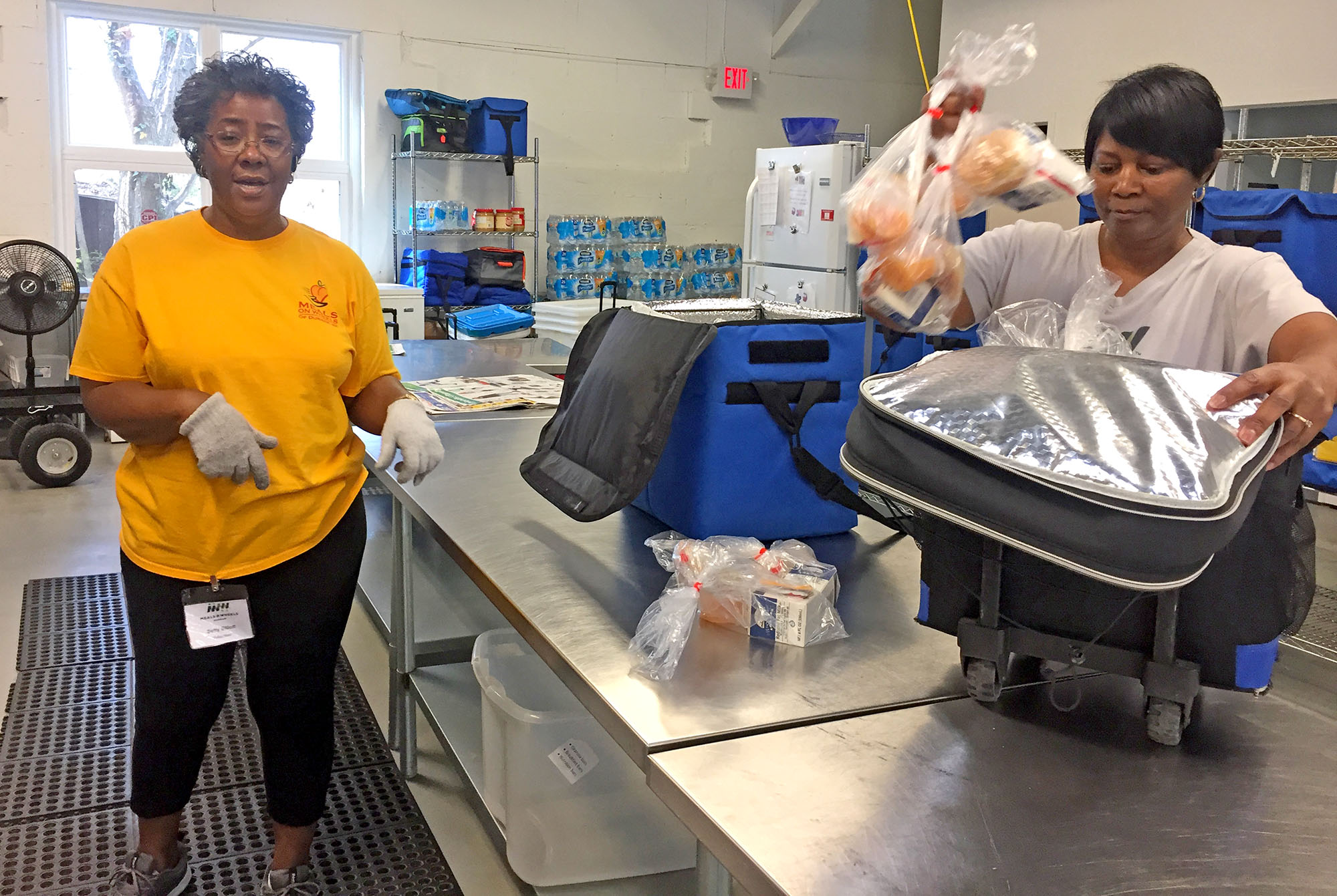 Volunteers Betty Elliott and Selma Hayes work together to package meals in the morning. (Staff photo by Molly Smith)

After hearing about President Trump’s proposed budget cuts that endanger thousands of local Meals on Wheels agencies across the country, I expected a more solemn atmosphere from the organization. What I found instead were employees and volunteers who put aside their fears for the sake of the Durham community.

“Realistically, the government should be pouring money into this program,” said Gale Adland, the executive director. “Delivering nutritious meals to seniors is proven to decrease doctor visits and increase quality of life.”

Gale explained that the new budget threatens the Older Americans Act and the Community Services Block Grant, both of which many Meals on Wheels agencies rely on for around 35 percent of their funding.

According to Gale, she’s only seen an increase in need for the program in her seven years of working there.

“The senior population is growing,” she said. “There are more people over the age of 60 in Durham than there are under the age of 17.”

Although the number of clients is rising, this Meals on Wheels doesn’t suffer from a lack of willing volunteers. As I walked through the building asking questions, their responses were interrupted by quick exchanges with one another in order to keep the assembly line moving.

“It takes a little under an hour each morning, and we normally package around 450 meals,” volunteer and retired teacher Betty Elliott said. “It really is a team effort.” 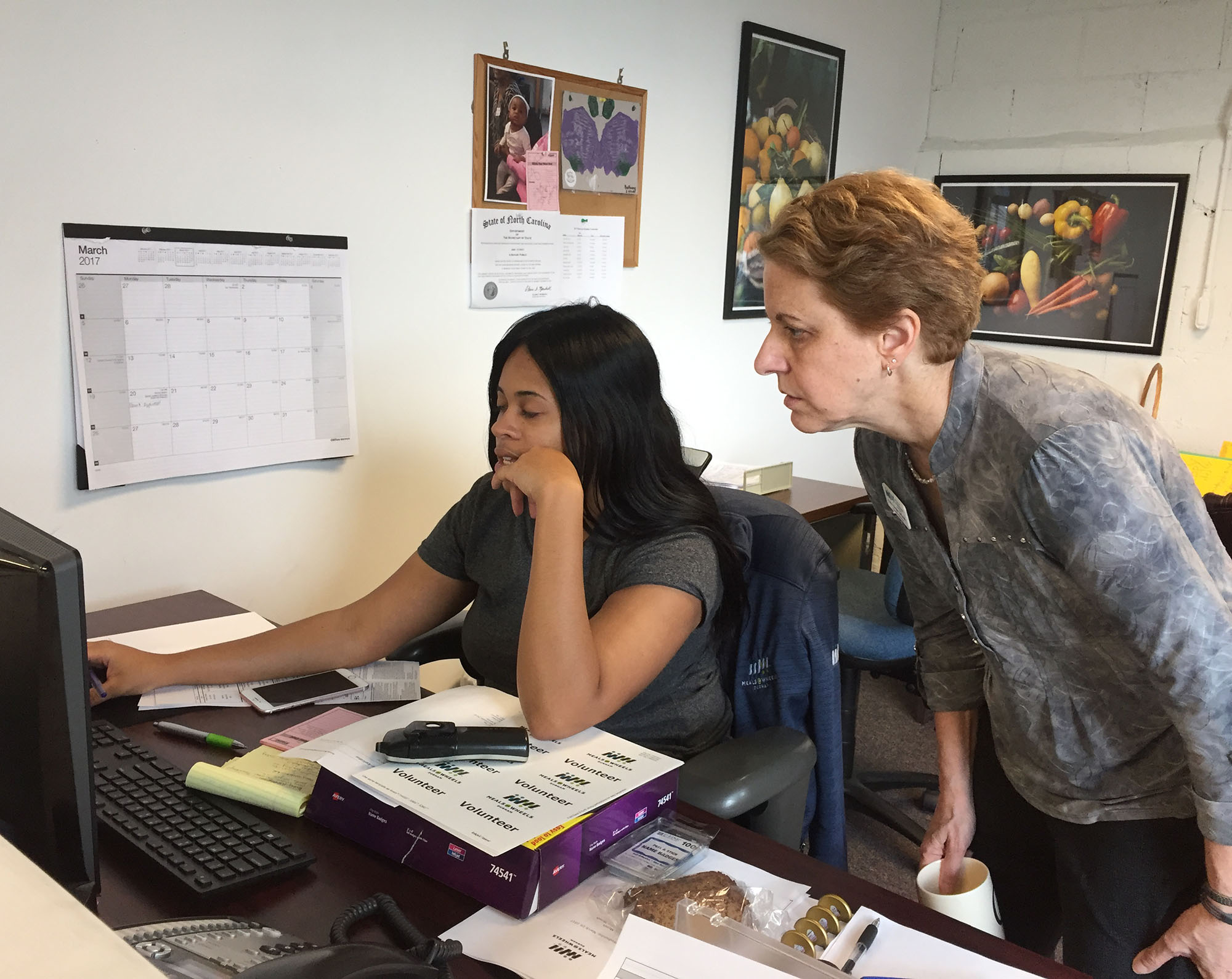 According to Gale, the fresh food comes daily from Spicy Green Gourmet catering services. Each client gets a hot and cold meal for the day, each kept at the right temperature – drivers often need to wrap each hot meal in a donated Durham Herald-Sun newspaper to ensure the clients don’t burn their hands.

When I asked greeter Christine Cotten why she thought the organization was vital to Durham, she surprised me with her response.

“You need to go ride with someone,” she said. “You have to see these people – if we don’t deliver to them, they may not eat that day.”

I decided to heed her advice. Though the volunteers themselves were inspiring and all had stories of their own, they seemed to care so deeply about those they were serving.

As soon as I agreed to her suggestion, Christine wrapped me in a hug so tightly that Gale walked up to ask how we knew each other.

“We don’t,” Christine responded. “We’re just in the hugging business.”

A few mornings later, I arrived back at the hugging haven to hop in with a driver. I was greeted by name and referred to the mother-and-son team of Anne and Will Aitchison.

The Aitchisons have been volunteering with Meals on Wheels since the late ‘90s. Anne’s kind eyes and Will’s companionable personality make them the perfect pair for this kind of work. They explained their strategy to me on the way to the first house.

“We’re in and out, but we still have a conversation with [the clients],” Anne said. “We don’t even have to sit down, and it brightens their whole day.”

The two talked through the plan for the morning, and Anne mentioned a client on dialysis who wasn’t going to be home at delivery time. When she told Will he would need to go inside to put the meal in the fridge, his face lit up as he remembered that this client has a bulldog. 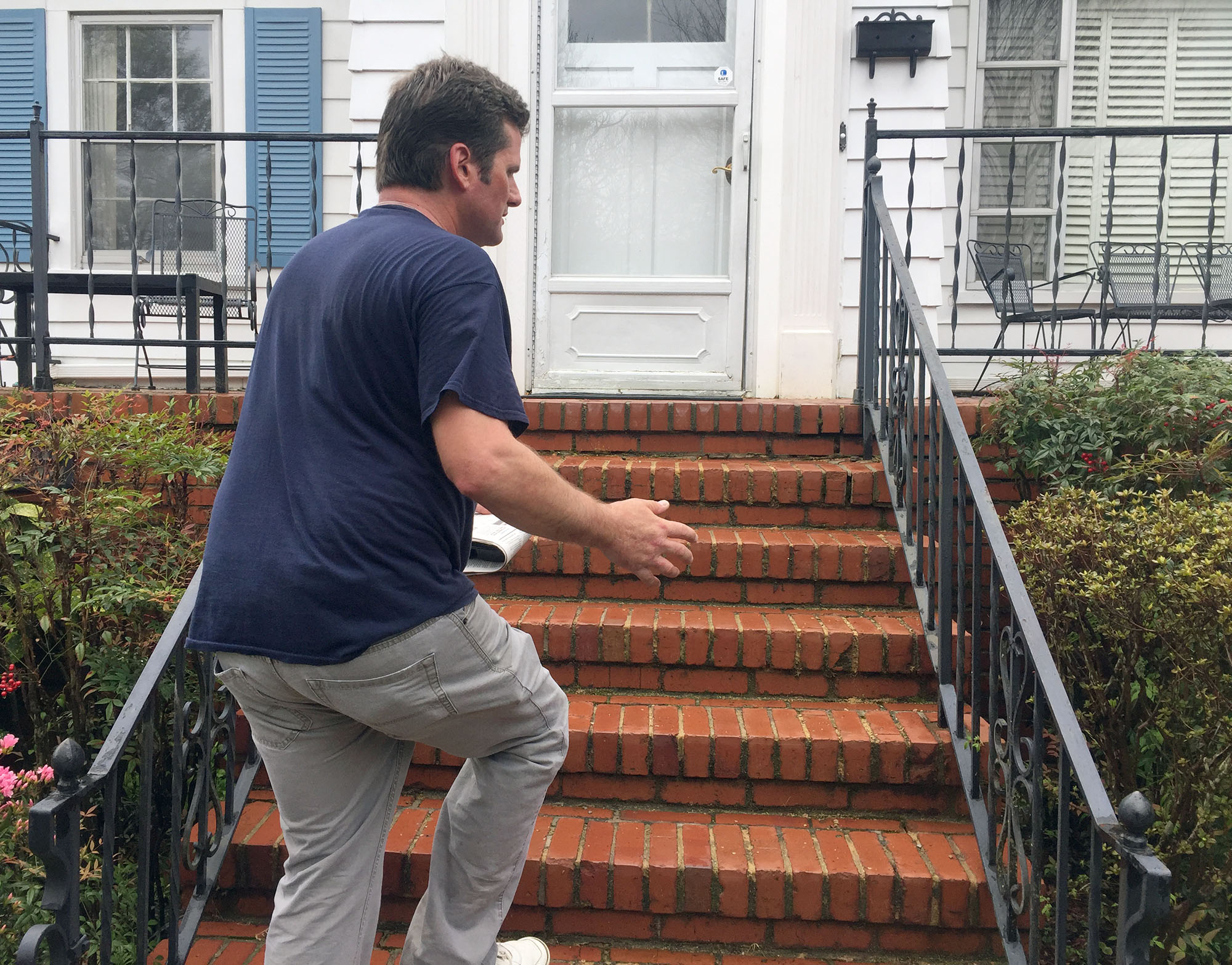 Will Aitchison heads up the steps to a client’s home while describing their background. (Staff photo by Molly Smith)

I walked up to each door with Will as he asked the clients about flowers he remembered they were planting in their gardens, and complimented them on haircuts they had gotten since the last time he saw them.

Will wasn’t the only one who remembered something specific about each of the residents; Anne was delighted to tell me detailed backgrounds. She knew that one client built his house with his wife before she died, and that the first family to live on McNair Street named it after themselves – they still live there, and we delivered to them.

“It’s just so important to connect with people,” Anne said. “If there’s a problem, there’s a constant search for solutions to make the program better.”

Any given day for a volunteer could start with packaging chicken and potatoes and end with priceless life advice from clients.

As we walked up to James Hill’s house and got no answer from ringing the doorbell, I started to get worried. Gale had mentioned volunteers who ended up saving lives by calling 911 if a client didn’t come to the door.

But my heart rate returned to normal when a sleepy James arrived at the door with a toothy grin; we had woken him up from a nap. After some light conversation, Will complimented his smile.

“Me and the Lord are tight,” James said with a playful wink, “and a good smile – now that’ll get you somewhere.”

After leaving James, we visited one woman who is known for keeping a balloon tied to the chair she watches television in to keep her spirits up. Another woman grew tearful as I handed her the newspaper, because she said she could never bend down to pick it up off of her porch.

But one of the most memorable visits was with Edna Mason, a 97-year-old woman who spent her life working at North Carolina Mutual Life Insurance Company. Mostly referred to as “Mutual,” it’s the largest black-owned insurance company in the nation and the first created in the state, according to the African-American registry. 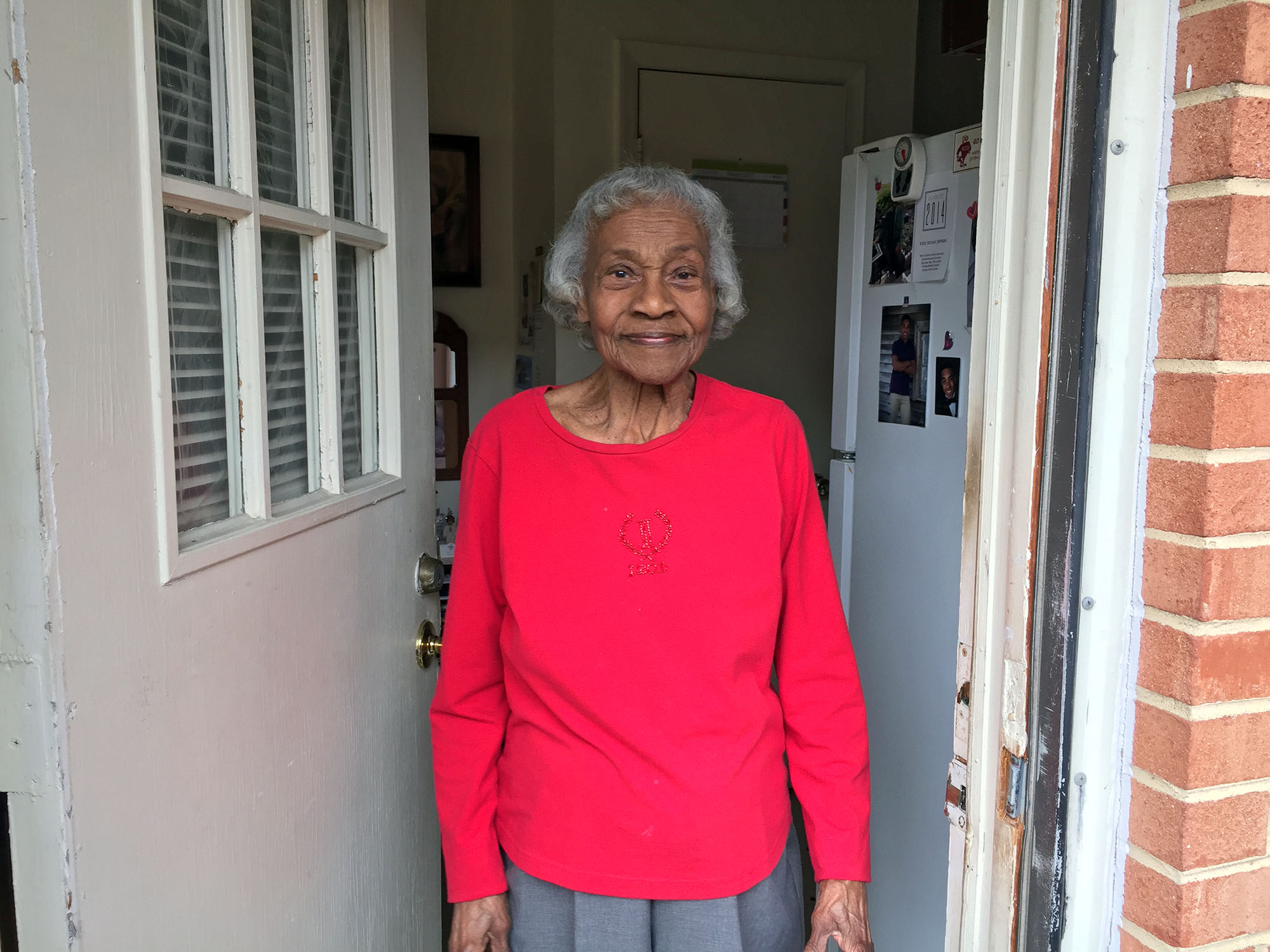 Dressed sharply in slacks and a red blouse, Edna welcomed us with a bashful twinkle in her eye.

On the drive back, Anne mentioned the difficulty that arises when clients approach the end of life.

“One year I lost five clients,” she said, clutching her heart.

That’s the best way I can capsulate what goes on at Meals on Wheels of Durham – both a profound, life-lengthening impact on the clients when they get delicious meals with a side of meaningful conversation, and an inherent modesty and kindness reflected in the volunteers.

Molly Smith is a sophomore at UNC-CH double majoring in English and Journalism. She is serving on the staff of the Durham VOICE as the social media editor.