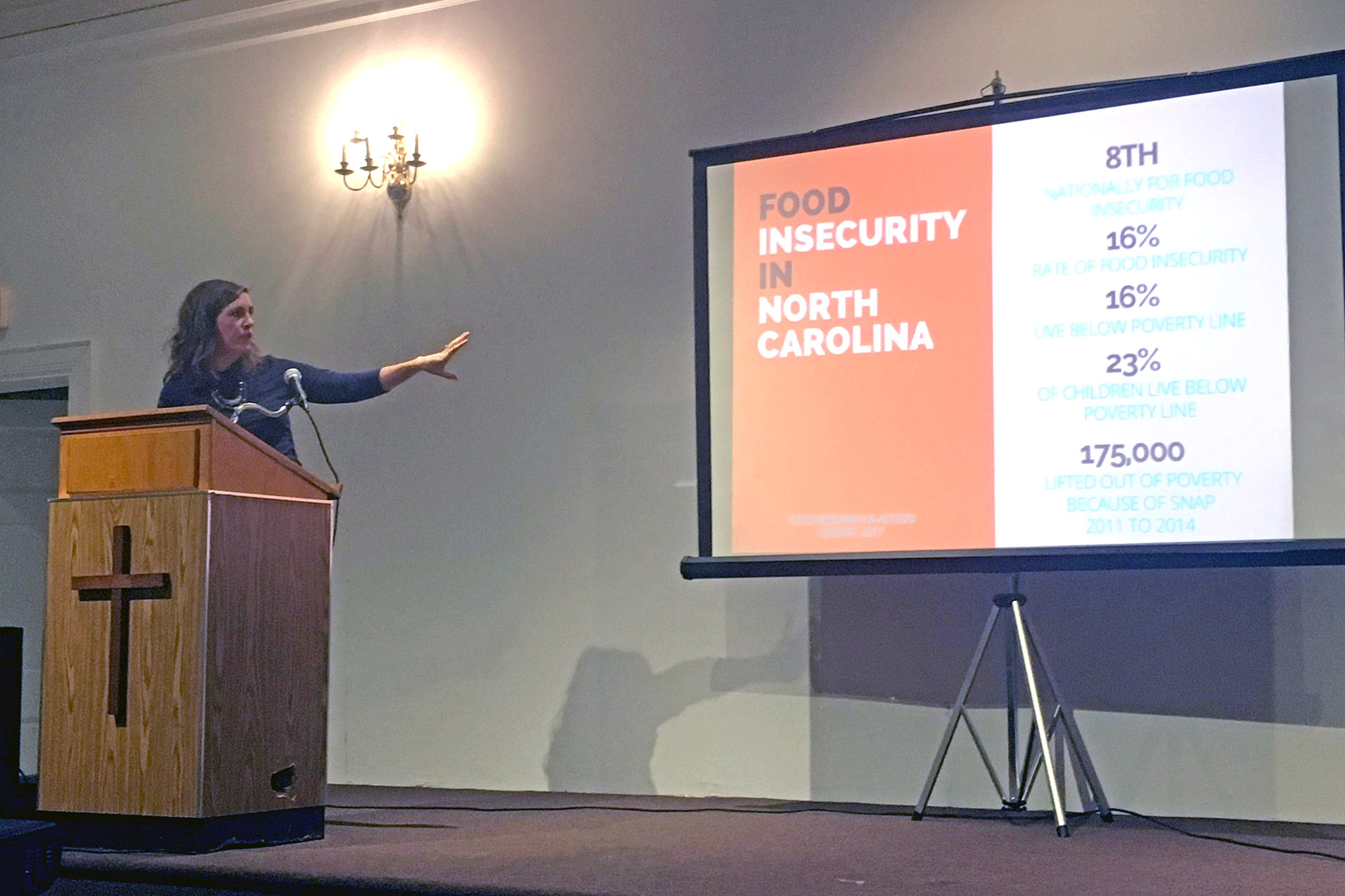 Durham food security may take a blow due to policy changes to the Supplemental Nutrition Assistance Program, or SNAP.

Community members, policymakers, and experts met last Thursday in Durham to discuss the federal policy changes and outcomes. The meeting, entitled, “Can SNAP End Hunger? A forum on food justice,” was held at Westminster Presbyterian Church and was presented by End Hunger Durham.

Due to the potential passing of tax reform in Washington, entitlement – and specifically SNAP – are on the chopping block, said Reginald Speight, director for U.S. Rep. G.K. Butterfield.

SNAP is a government funded entitlement program that gives citizens the “sustenance they need to get back on their feet.” Food stamps were renamed SNAP in 2008.

According to the Center on Budget and Policy Priorities, in a typical month in 2017 SNAP helps 40 million Americans afford what is considered a nutritionally adequate meal. A majority of SNAP participants are vulnerable groups: children, seniors, and people with disabilities.

SNAP is means-tested, meaning it is available to anyone who qualifies. In principle, there should not be a cap, said former SNAP policy advocate and current End Hunger Durham member Sam Hoeffler.

“If someone loses their job, they can apply for SNAP and receive benefits the next day,” said Hoeffler.

Hoeffler stressed the importance of this program for families in need, particularly in states like North Carolina.

SNAP is given to 1,568,000 in North Carolina at an average of $119 in benefits a month. Sixty-eight percent of recipients are families with children and 47 percent are working. SNAP can be used to buy food at eligible retailers. Find a host of resources, from the online application to the eligible SNAP distributors, on the USDA website.

But does SNAP provide nutritionally viable options for families? According to Lindsey Maslow, assistant professor and extension specialist at the NC State Department of Agriculture, for all the good SNAP does, it leaves a little to be desired.

Even though SNAP helps, people are still struggling to afford healthy food. A study Maslow worked on last year showed that SNAP only covers 43-60 percent of a government advised healthy diet.

Farmer’s markets can provide healthy food and SNAP recipients can get twice the amount of food at this type of market. NC State offers a comprehensive resource guide to using SNAP at markets here.

The problem with buying local is accessibility.

According to USDA data, North Carolina ranks 9th for agriculture producing states. “It’s just a little bit ironic we are one of the biggest food producers in the country and one of the most insecure,” Maslow said.

SNAP guidelines also affect the quality of food in schools and can be seen as a double-edged sword.

SNAP has been proven to have a large impact on childhood nutrition. In Durham County Public Schools, 66 percent of all students are on free and reduced lunch in addition to the universal free breakfast offered at schools.

If a school is determined to have 40 percent of students on SNAP, that school can be given the Community Eligibility Provision and receive free lunch for all of its students. Thirteen out of 54 public schools are recipients of free breakfast and lunch, and if things continue as Executive Director of School Nutrition Service at Durham Public Schools Jim Keaton would like, six more schools will be added to the free lunch program in the next year.

Durham County Schools have one of the best food systems in North Carolina, according to Keaton. Per the 2015-16 school year Student Nutrition Services report, Durham earned a silver award with the highest being gold. What has really undermined the food quality are mandates from the federal government.

Legislation dictates that there will no longer be any reimbursement for protein at breakfast. If a food services system wants to produce bread that is not whole grain, they must receive a waiver. Keaton says that since the changes to the food standards in 2012, there has been a steady decrease in students eating at school.

“We can’t serve salads because they don’t meet the nutritional guidelines,” Keaton said. He noted that energy drinks did meet the selling requirements.

SNAP supports use of Electronic Benefit Transfer cards, or EBT, which work like ATM cards with benefits loaded. Jim Keaton noted that because the cards look just like other customers’ payments, the old concept of shame surrounding food stamps is largely being destigmatized.

“I was that kid growing up,” Keaton said about children in food stamp families. “It’s important to destigmatize assistance.”

SNAP also plays an important role for seniors who do not have a Ωteady income, yet some think it could do more to help. The major expenses seniors face are medication, but they are typically on a fixed income from pensions or none at all. A senior can get an average of $16 a month in Durham, according to Pinky Davis-Boyd, DSS food assistance applications manager.

The amount they receive is based on number of people in the household, income, and how much it costs to heat and cool the home. Only 42 percent of eligible seniors are using these services, which End Hunger Durham attributes to stigma, misinformation about SNAP, and lack of information on how to apply. Information can be found online through DSS.

The speakers shared some of their SNAP policy grievances, but the complaints were forgotten as each implored the crowd to call their Congressional representatives to save SNAP. This sentiment was furthered when Speight took the stage to report on the ramifications of decisions in Washington.

“If a tax plan goes through, entitlement is next,” Speight said. Butterfield, a Democrat, is an ally for keeping SNAP active.

The budget cuts would offer a slew of changes that would negatively affect SNAP going forward, with the main change being making block-grants and shifting the cost to states. A large portion of the cuts would come from states having “flexibility” to adjust income, which, according to Maslow, means changing income levels and who gets covered.

Speight was candid about advocating at the state level and communicating with the General Assembly. “If there is a shortfall,” he said, “that block grant will not go to food.”

For schools, the lowering of the SNAP threshold would take away the Community Eligibility Provision for many Durham schools. “I implore you, block the block grant,” Keaton said.

The call to action led by policy advocate Marissa Kay asked citizens to call their policymakers listed below to fight for SNAP. Their immediate ask: “Call your senators and say ‘don’t vote for this tax bill.’”