After 47 years, “Swing School,” a community favorite production for many decades, returned to the stage at Hillside High School.

The Hillside High School Drama Department – under the direction of Wendell Tabb –  put on four performances of its new adaptation, called “Hallelujah! Swing School,”  from Feb. 15-17. The production has long been a Hillside High School tradition that John Gattis, the founder of Hillside’s drama department, brought to the school in 1947 with his production “Mr. G’s Swing School.”

“Back then, within the arts, that was like Broadway for [the students] because they got to do a major, big production,” said Tabb.

Tabb says Gattis played an important role in advancing the arts at Hillside when he was theater director. 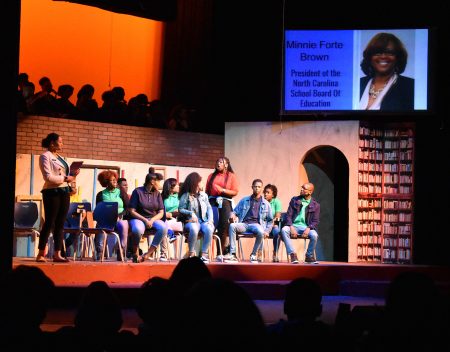 Senior Emani Eaglin, playing the role of Riley, speaks about Minnie Forte Brown, president of the North Carolina Board of Education. The first act of the play features informative dialogue about important Black figures from North Carolina. (Staff photo by Will Shropshire)

“Hillside has always been known for having great artists come out of the school. [Gattis] was providing that opportunity,” Tabb said. “We’ve always had a nationally known marching band. We’ve had those artists like Ernie Barnes as a visual artist give this school great recognition. We’ve had André Leon Talley within the fashion world. Mr. Gattis gave them an opportunity back then to showcase their skills, which was very important to the community.”

The new adaptation of Gattis’ original “Mr. G’s Swing School” brings the production into 2019, with new scenes and a script that features important African-Americans, especially those from North Carolina. In the first act of the play, the students of Hillside High School prepare to put on “Swing School,” and they perform a version of Mr. G’s original production in the second act.

“It gave us an opportunity to take a look back at how they had structured their shows from beginning to end,” Tabb said. “We wanted to highlight what they had done but also bring a new twist to what ‘Swing School’ may be like in 2019.”

After researching famous black leaders for months, cast members wrote the script for the first act, working over winter break to complete it.

“I guess my favorite part was actually writing it,” said Assistant Director Daniella Ochman, a senior who played the character of Aaliyah, the stage manager. “It was very impressive to see how we could create original music and create an original script and put that together with a whole new cast and put that on stage.”

Eaglin, who played Riley in the production, said that before getting involved in theater, she felt socially lost. “Hillside theater has helped me out as a person as well as growing as a leader and just mentally. But also, it’s kind of given me my passion and made me realize where I should go afterward in life.”

Stage Manager Jalen McKoy, a senior and member of the ensemble, said Hillside theater also provides families in the community with a space to see well-produced, Broadway-style shows.

“It means a lot because I’ve been coming to Hillside plays for my entire life since I was a little kid,” McKoy said. “When I was younger, it seemed like a distant dream to be able to be on the stage at Hillside. So being able to actually do that now, and then hopefully there are little kids in the audience now that look at us on the stage and say, ‘I want to do that as well.’ I think that’s what makes it most important.”

For a printer-friendly version of this story, please click here.

Will Shropshire, a UNC-CH senior majoring in advertising and music, is from Rockville, Md. This semester he is serving as photo editor of the Durham VOICE.