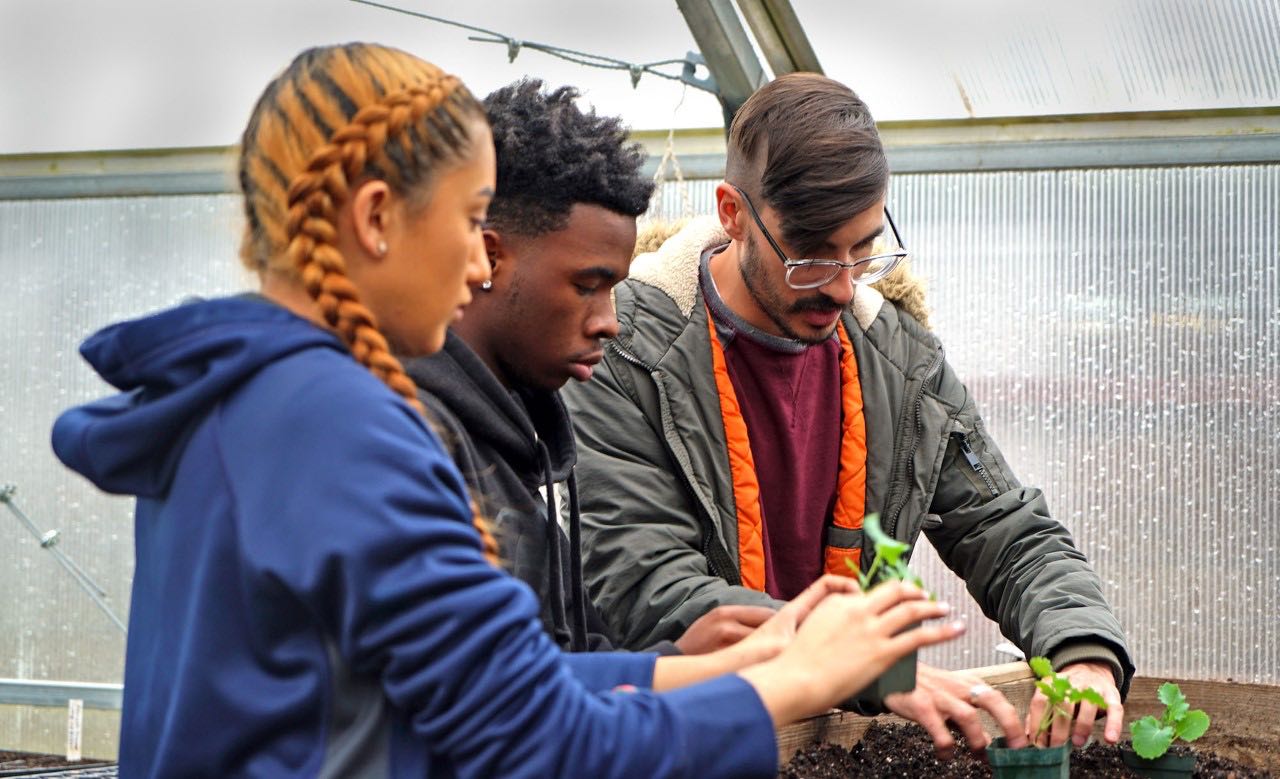 SEEDS Farm Manager and Educator Trevor Hyde, right, shows DIG youth members Samantha Vazquee, left, and Demonte Bolden, middle, how to repot plants in the SEEDS greenhouse. “DIG is really the proof that what we’re doing has an impact on the youth that we work with,” Hyde said. (Staff photo by Hannah McClellan)

On a cold and rainy February afternoon, 17-year-olds Samantha Vazquee and Demonte Bolden are not hiding inside – they’re hard at work repotting dozens of plants after a day at school.

The DIG program relaunched this spring with three high school student members after being put on pause in 2016. Since its relaunch on Jan. 30, the program is starting with garden and farm stand management, cooking healthy meals and advocating for food justice in Durham.

Trevor Hyde, farm manager and SEEDS educator, said the staff spoke with many DIG alumni at an event in the fall to get feedback on the program’s stages before its relaunch.

“We’re trying to sort of find that sweet spot again – being community engaged but also actively maintaining the farm space and making sure it stays pretty productive, and we’re trying to find good outlets for the produce,” he said. “Our focus right now is trying to be as youth-led as possible – so training the youth to have these core skills that a lot of our younger youth who’ve been with us for a while already have, and how to do the actual farm work.”

The DIG youth crew consists of three members, although it typically has four year-round youth members. Each member is paid a competitive wage for their work at SEEDS. Hyde said is a part of their commitment to being an equitable organization, incentivizing the work and opening up DIG to a wider audience.

The program runs three to four times a week and is currently working with Communities in Partnership to set up a farm stand geared towards farmers of color, to increase food access in Old East Durham and provide space for DIG students to sell produce as well. This farm stand would be ran and managed by Communities in Partnership and hosted by SEEDS.

Vazquee is a senior at Southern School of Energy and Sustainability, and she applied to work with DIG after Hyde did a hands-on activity with medicinal herbs to create herbal teas at her school.

“(I’m) excited to see the produce that comes out – and how much we can actually sell,” she said. “We don’t know where our food comes from, they put so much chemicals into it and here it’s organic, you don’t have to worry about any side effects that come along with it.” 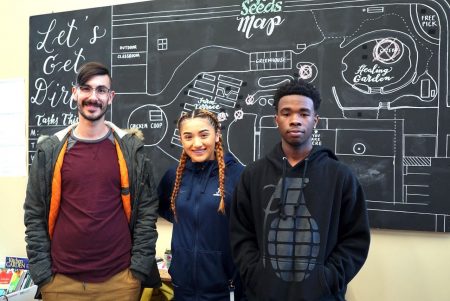 (From left to right) SEEDS Farm Manager and Educator Trevor Hyde and DIG youth Members Samantha Vazquee and Demonte Bolden at SEEDS. “I’m trying to be able to start my own garden one day,” Bolden said. (Staff photo by Hannah McClellan)

Along with Vazquee and Bolden, Southern School of Energy and Sustainability senior Isaiah Platt is also a youth member of DIG. Hyde said SEEDS is trying to coordinate with a younger student so the last spot won’t remain empty, but the program likely won’t be fully staffed until summer, when students have better availability.

One of the challenges of relaunching DIG is the later release time for high school students in Durham. Hyde said the current 4:30 p.m. release time has made doing an after-school program for high schoolers nearly impossible. One way they are overcoming this challenge is by working with students approved for early release.

Bolden, 17, heard about the program from a counselor at his school. Due to his previous experience working at the Durham Public Schools Hub Farm, he was interested in applying to DIG.

“I think it’s important to know how to grow different types of food yourself in case you don’t have any food, and to save money,” Bolden said. “I’m trying to be able to start my own garden one day.”

In the past, Hyde said DIG youth members have identified issues in the community and decided to participate in varying forms of activism to address those issues. He said the program discusses the history of food and access, with the goal of empowering the students to take the actions they want to take.

“We want to make sure that the students have that core skill set of actually knowing how to farm, so they have that skill set. That’s actually really important, not just related to agriculture, but as a resilience-building practice for people with limited food access to be able to grow their own food relatively simply and to have those skills to know they can succeed outside of a corrupt and racist food system,” Hyde said. “I think as long as the system is set up this way, it’s always going to treat these people with disadvantage, so to just say, ‘Okay, I don’t need this, I have my own skill set and can do this on my own,’ is really powerful.”

While she doesn’t necessarily want to own a farm one day, Vazquee said she is looking forward to learning more about cooking healthy meals through DIG.

“I’m leaving off to college soon, so that kind of stresses me out that I’m leaving soon and I don’t know how to cook,” she said. “I know this also involves cooking so I know that’s going to help me out a little bit with small, little recipes.”

Rainy weather has made consistent gardening a challenge so far. However, Bolden and Vazquee said they’ve been learning how to plant in the SEEDS greenhouse, and how to fix the beds they’ll be using to plant the majority of their produce.

Ideally, Hyde said SEEDS hopes to build a three-part program that works with students through the entire arch of education. He said this will give youth in the community who started with SEEDS as elementary students a huge advantage when applying to DIG.

“DIG is really the proof that what we’re doing has an impact on the youth that we work with,” he said. “I think the length of the program, honestly, there are a lot of other programs that only work with high school or only work with middle school, but the fact that we have this really long arch, I think, is actually one of the things that gives us a greater impact, even though we work with a smaller number of people.”