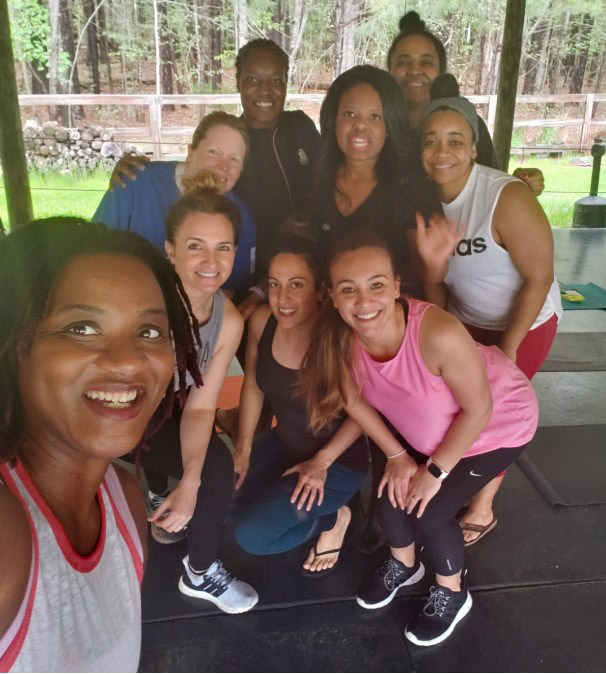 Organizer Katrina Hayes is surrounded by the participants for a selfie by instructor Amber Brown. (Photo by Amber Brown)

Katrina Hayes, an Autism advocate, is passionate about bringing her craft into the streets of Raleigh and the surrounding areas.

Hayes is a mother of a child with Autism and has occasionally hosted fundraising events to help the cause.

“As the mother of a child with Autism, I have to be very cognizant where my time and energy goes,” Hayes said.

Hayes finally held an event that has been on her bucket list for years: Trap Yoga for Autism. Her last event, Team Tristen at the NYC Autism Speaks Walk, was in 2011.

“So as you can see, it’s been a long time. I recently got an itch to organize another event,” Hayes said.

“It’s a beautiful wedding venue. When someone first told me about the venue, because it had farm in the name, I didn’t know what to expect. Once I set foot on the venue, I was blown away. It’s breathtaking. It’s peaceful and surrounded by nature,” Hayes said. 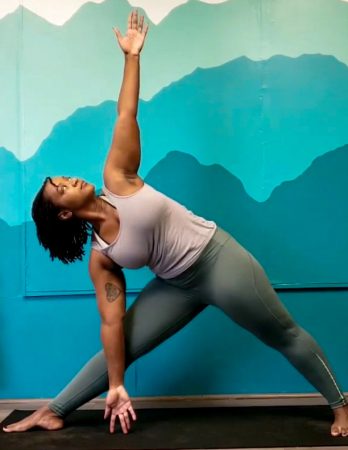 This event was held only for ladies from ages 18-45.

“We value inclusive environments, so all races, ethnicities, and abilities were invited,” Hayes said.

“The ladies had a 1-hour yoga session with music by artists like Cardi B and Lil Naz X. After the flow the ladies connected over some refreshments on us,” Hayes said.

There was a motivational video by Oprah Winfrey, selected based on intentions that the participants chose to focus on.

“It was so rewarding,” said participant Kelly Barlett. “This was a one of a kind yoga class full of fun and positive energy.”

Trap Yoga for Autism event benefited the Mariposa School for Children with Autism, which has been instrumental in the process of taking care of Hayes’ son’s educational needs.

“I love to attend functions that benefit a cause dear to my heart,” said Lindsey Button.

The purpose of this event was to release tension, feed the mind, body, and spirit, and to tap into ones inner goddess while enjoying trap music.

“I had made a vow to try something new every month and Trap Yoga had been on my bucket list. I put a class on my calendar but had so many other things to do that day,” Hayes said.

She almost didn’t make it because of some technical issues with her GPS, which she uses often to travel. She was going to turn around and go home.

“Eventually I made it, and I was glad I did. It was one of the best experiences I had. I released tension and stress. It was fun and it’s hard to explain why… but you can actually zone out while the music is playing. After that experience I knew I wanted to mesh my love of fitness with a fundraiser for Autism Awareness Month,” Hayes said.

This was Hayes’ first fitness for a cause event. She’s been asked to hold others even though she hasn’t had this one yet.

Hayes says that because she is the mother and sister of individuals with Autism, she has become a better person. She says that she is more patient and “capable of accepting, and respecting people who are different than me, or have different abilities.”

To learn more about Hayes, you can contact her at 347-661-0235, email autismfitmom@gmail.com, or direct message on Instagram at @AutismFitMom. And remember to “never be afraid of who you are!”

Heaven Gullate is an NCCU student from Gastonia. This spring she is serving as a staff writer for the Durham VOICE.